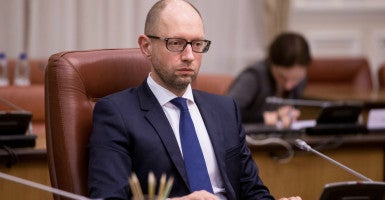 “We cannot allow destabilization of the executive branch during a war,” Yatsenyuk said.

Ukrainian forces are still battling combined Russian-separatist forces in a 2-year-old war that has killed more than 10,000 and displaced more than 1 million.

Accusations of corruption and criticism of austerity measures he helped put in place have marred Yatsenyuk’s term in office.

The 41-year-old weathered a no-confidence vote in mid-February, spurring a government crisis that has lasted nearly two months.

“The political crisis in the country was unleashed artificially. The desire to change one person has blinded some politicians and paralyzed their will of real changes,” Yatsenyuk said during Sunday’s address.

For weeks, Ukrainian media have been ripe with rumors of secret meetings among a group of key Ukrainian politicians called the “strategic seven,” suggesting behind-the-scenes alliance-building to prevent early parliamentary elections in the event of Yatsenyuk’s departure. In a statement released on the Ukrainian president’s website Sunday evening, Poroshenko pushed for the formation of a new coalition and the selection of a new prime minister within a week.

“I agree that the country can no longer put up with the absence of the authorities. That is why I expect the parliament to bring good news next week,” Poroshenko said, according to the statement.

Poroshenko stressed his desire to avoid early parliamentary elections, adding: “Another parliament will not be better. In this situation, we must ensure that the parliament fulfills its promises made during the signature of the coalition agreement and finishes the process of reforms.”

U.S. Vice President Joe Biden called Yatsenyuk on Sunday, thanking him for his service to Ukraine. Biden pushed for Ukraine to quickly form a new cabinet “committed to implementing needed reforms, in particular those recommended by the International Monetary Fund and European Union,” according to a readout of the conversation the U.S. Embassy to Ukraine emailed to journalists on Sunday.

Ukrainians’ confidence in the country’s post-revolution government is in free-fall.

“In a lot of government institutions, they only changed the head after the revolution. Everything else is the same from before,” said Bogdan Logvynenko, 27, a Ukrainian journalist. “Now we’re asking, ‘How do you change the system?’”

Recent polls indicate that Ukrainians have less confidence in their government now than they did prior to the 2014 revolution.

Dutch voters rejected a trade pact between the EU and Ukraine last Wednesday, adding to the sentiment among many Ukrainians that Kyiv was not doing enough to represent the country’s interests abroad.

Yatsenyuk’s announced resignation takes some political pressure off Poroshenko, who is under scrutiny for his offshore bank accounts, which the Panama Papers revealed last week.

Poroshenko pledged to sell his chocolate company, Roshen, after he took office in 2014. He claimed to have transferred his assets to a blind trust, but the Panama papers revealed they went to a holding company in the British Virgin Islands.

Poroshenko said advisers control his assets without his oversight, and Ukraine’s chief prosecutor said Poroshenko had not committed a crime.

Yet Poroshenko’s finances sparked a media firestorm in Ukraine. Some claim that the president’s dealings were designed to skirt tax rules, highlighting a pattern of corruption and shady dealings among Ukraine’s leaders that reflects business as usual during the past 25 years of post-Soviet independence.

According to an April 8 editorial in the English-language Kyiv Post: “The nearly 25 years of tax dodging and misspent government budgets show every day in shortened lives, bad education, poor health care, dilapidated buildings, potholed streets and myriad other problems that Ukraine should not tolerate.”