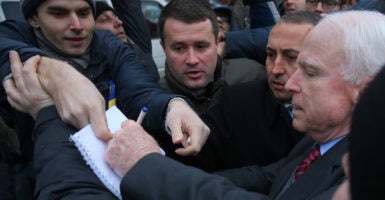 At the front-line village of Krymske in 2015, Ukrainian troops renamed a street that had honored a Soviet luminary, calling it “John McCain Street.” The troops taped a printed-out sheet of paper with the U.S. senator’s picture to a power pole to make it official.

Apparently, “hero” translates to “John McCain” for anyone fighting for freedom.

The Arizona Republican died Saturday from a brain tumor, four days short of his 82nd birthday. I’m sure that in the wake of McCain’s death, many buildings and streets across America will be renamed in his honor.

For me, however, one of the most telling testaments to the quality of McCain’s life is that potholed, artillery-divoted street that bears his name in eastern Ukraine’s war zone.

McCain also was a champion of people around the world fighting for their freedom. That includes the people of Ukraine, who’ve endured a revolution and war to achieve the liberty to chart their own future as a sovereign, democratic nation, free from Russian oppression.

McCain was on Kyiv’s central square, the Maidan, in December 2013 to cheer on the brave protesters who would later overthrow the brutal, pro-Russian regime of Viktor Yanukovych.

“We are here to support your just cause, the sovereign right of Ukraine to determine its own destiny freely and independently,” McCain told the Ukrainian protesters.

The Arizona senator visited the front-line Ukrainian town of Shyrokyne for New Year’s Eve in 2016—it was a bold move to show solidarity with Ukrainian troops who lived under daily shelling by Russian forces (and still do, too).

McCain had a message for Russian President Vladimir Putin.

“I would like to tell Putin that he will never be able to deprive Ukrainians of freedom and independence,” McCain told the soldiers, according to Ukrainian agencies. “Your struggle is our struggle.”

In Ukraine, as in America, John McCain will be remembered as a hero.

“We will never forget his invaluable contribution to the development of democracy and freedom in Ukraine and the support of our state,” Ukrainian President Petro Poroshenko wrote Sunday on Twitter. “The memory of John McCain will remain in our hearts forever.”

There’s a special moment, and every pilot knows this, after you’ve landed your aircraft.

You taxi to your parking spot, tap and hold the brakes, and shut down the engine or engines. After the chaos, the stress, the power, the exhilaration, the worry, the lulls, the thrills, the ecstasy, the terror, the focus, and the zen-like flow. After all these things, which only flying can bundle together, it’s simply quiet and still.

At first, there is an emotion that feels like relief. But it soon gives way to something else—a desire to do it all again.

For pilots, touching the heavens is not a temporary condition we fleetingly enjoy. It becomes our natural condition, to which we long to return.

If you show courage in the face of fear—even just once—it’s easier to do so again and again until courage becomes a habit.

John McCain’s life was a testament to that truth.

In 1973, John McCain returned to the U.S. after five and half years as a prisoner of war in North Vietnam. At that time, one would have excused McCain if he had decided to simply ride out the remaining decades of his life in peaceful obscurity.

At that point, after all the torture he’d endured and all the years he’d lost, you’d think McCain had paid his dues to his country and had done enough to earn a life lived solely in pursuit of happiness.

Yet, when he stepped back on American soil in 1973, McCain was just getting warmed up—the bulk of his service to the U.S. was yet to come.

“In prison, I fell in love with my country,” McCain wrote in the book “Faith of My Fathers: A Family Memoir,” adding:

I had loved her before then, but like most young people, my affection was little more than a simple appreciation for the comforts and privileges most Americans enjoyed and took for granted. It wasn’t until I had lost America for a time that I realized how much I loved her.

A lot has been written about the illogical nature of heroism. Charles Darwin, in particular, was absorbed by the idea. On the surface, heroism went against Darwin’s thesis that the ultimate aim of any living creature is to survive so that it might pass on its personal set of genes.

What then motivates a hero to purposefully risk his or her life for the chance that someone else’s genes might live on?

Why does a brave soldier leap into the line of fire to drag a wounded comrade to safety, risking his or her genetic immortality for the sake of someone else’s?

Why, also, while on the verge of death and after brutal torture, would you refuse early release from a North Vietnamese prison?

For McCain, it was simple—he had to honor his nation’s code of conduct for prisoners of war and show solidarity with his fellow captive Americans. You leave in the order you arrived; that’s the code.

Yet, let’s face it, such selfless actions defy the narrow calculus of selfish interests in the spirit of natural selection. Most of us would crack under such circumstances and revert to looking out for numero uno.

Of course, humans are not natural selection automatons. There’s a lot more that goes on deep inside our craniums than a lifelong devotion to advancing our personal DNA. We are also shaped by the incomprehensibly complex, and often illogical, impulses of our emotional beings, which sometimes inspire us to tread to the edge of death out of a sense of duty to serve a cause greater than ourselves.

It’s true that uncommon heroism and common cowardice guarantee our species’ survival. That’s why in a moment of crisis most people stand idly on the sidelines while the heroic few step forward. That’s why most of us could never endure the trials of John McCain’s life and maintain the courage, honor, and fidelity to duty he steadfastly displayed.

We can’t all be heroes. And we all can’t live our lives like John McCain lived his. But heroes inspire us to live a little better, and a little more honorably. In the end, heroes like John McCain are the keels that keep the sailboat of humanity from tipping over against the force of our own selfish instincts.

That’s an important lesson for the American people.

Around the world, courageous people are willing to fight to achieve the lives and liberties we Americans enjoy, and typically take for granted.

I’ve seen this with my own eyes during my time embedded in combat with Ukrainian soldiers, the Kurdish peshmerga, soldiers in Afghanistan, and even with old Tibetan freedom fighters who’d once fought bravely against the Chinese invasion of their homeland.

The truth is, our country remains a beacon of hope for people around the world yearning to live free—even if we Americans don’t know it.

Yes, in our time we may fail to fully realize the promise of our nation’s founding. But we haven’t quit yet and we better make sure we never do—because the world is watching.

John McCain once wrote, “Nothing in life is more liberating than to fight for a cause larger than yourself, something that encompasses you but is not defined by your existence alone.”

John McCain lived a life worthy of the gifts he was born into. We should honor him by doing the same.