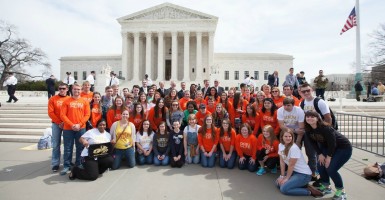 Students from Oklahoma Wesleyan University and Geneva College gather in front of the Supreme Court on Wednesday, March 23. Both schools are parties to the case Zubik v. Burwell. (Photo: Alliance Defending Freedom)

While group of nuns have become the de facto face of the Supreme Court case challenging the Affordable Care Act’s so-called “contraceptive mandate,” another community is set to be similarly affected by the court’s ruling: religiously affiliated colleges and universities.

Schools like Oklahoma Wesleyan University, an evangelical Christian university of the Wesleyan Church, are also parties to the Zubik v. Burwell case. The case, which went before the high court March 23 for oral arguments, challenges the Obamacare requirement that nonprofit employers offer their employees health care coverage that includes birth control, Plan B, ella, and other potentially life-ending drugs and devices.

The schools that are part of Zubik v. Burwell come from diverse backgrounds. Some are Catholic and oppose providing through their health care plans all forms of contraceptives. Others, like Oklahoma Wesleyan University, for example, only oppose drugs and devices that can lead to the termination of a pregnancy, not providing birth control. “We’re pro-life. So Plan B and ella would be off the table for the Wesleyan church because there are times when it can terminate a fertilized egg,” Dr. Everett Piper, president of Oklahoma Wesleyan University, told The Daily Signal. “That’s intervening into God’s power to define life, to give life, and to later on take it at his choosing.”

While Dr. Piper has no religious objection to birth control, he believes that Catholic universities and nonprofits like the Little Sisters of the Poor have a constitutional right to object themselves.

“Wesleyans wouldn’t presuppose or be arrogant enough to tell Catholics that they have to live their life the way we do. And Catholics don’t suggest that they can tell Wesleyans that they can live their lives the way we do,” he said. “The Catholic church has chosen to prohibit all contraception. The Wesleyan church has chosen to prohibit abortifacients because it takes a human life … and that’s OK.”

Zubik v. Burwell will set precedent for “roughly 1,000 religiously affiliated schools that object to birth control,” said Alison Tanner, co-editor-in-chief of the Georgetown Journal of Gender and the Law.

Tanner, who’s a student at Georgetown University, submitted an amicus brief to the Supreme Court on behalf of 240 students, faculty, and staff from 11 religiously affiliated universities arguing that if the current mandate is struck down, “serious obstacles” to contraceptive access would arise.

“I am not Catholic; I’m Jewish,” Tanner said on Wednesday as the Supreme Court was hearing oral arguments. “I am still a Georgetown student, and I still deserve access to no-cost birth control, not just because I don’t want to have a family right now, but because birth control is an essential health care for me. And it is essential health care for many of my friends.”

Part of the Obama administration’s goal with the health care law was to provide women access to comprehensive coverage of contraceptives, including abortion-inducing drugs and devices. Churches and church-controlled ministries were granted exemptions from this mandate (along with large corporations such as Exxon and Visa, who were grandfathered in), but religious nonprofits, schools, and other organizations were left out of that arrangement.

Instead, the Obama administration granted these groups a form of accommodation that allows them to sign a piece of paper stating their objection.

“Anyone who has a religious objection … doesn’t have to pay for, refer, doesn’t have to organize, doesn’t have to accommodate that contraception coverage for his or her employees,” said former Health and Human Services Secretary Kathleen Sebelius, according to NPR. “What they are required to do is provide notification to the government or their insurer that they are opting out. That’s it.”

Religious institutions and nonprofits like the Little Sisters of the Poor say this accommodation falls short of protecting their pro-life beliefs. They’ve equated the arrangement to the government coercing them to sign a “permission slip” that results in their formal cooperation with abortion.

The Wesleyan Church, Piper said, demands that “you practice what you preach.”

“You don’t just worship God in the four walls of the church. You actually leave the church and do something about it.”

Signing a “permission slip” that authorizes abortion, he added, is hypocritical to their very core.

“We don’t segregate the private and the public, we integrate private life and public life into an integrated life that represents integrity. We would argue the opposite of that would be hypocrisy.”

Elsa Spear, a student at Geneva College—another party to the case—said the government shouldn’t “force me and my college” to act against their belief that life begins at conception.

Spear attended a rally in front of the Supreme Court last Wednesday to speak out on behalf of Geneva students.

Losing, she said, “would be another blow” to students, who believe that abortion is a “consequence of de-humanization.” Religious institutions and nonprofits face millions of dollars in fines if they do not comply with the accommodation as it stands.

The question before the Supreme Court is whether the opt-out process poses a “substantial burden” on the rights of religious groups and whether or not the government has a compelling interest in forcing them to abide by the current accommodation.

With the passing of conservative Justice Antonin Scalia last month, a total of eight justices sit on the Supreme Court. If a tie occurs, the decisions of the lower appeals courts will stand. In those decisions, nearly all appeals courts sided with the Obama administration, meaning the mandate will essentially stand.