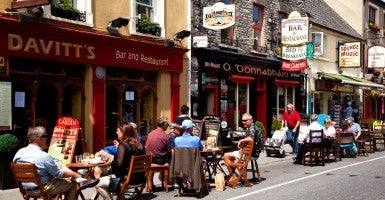 March 17 is St. Patrick’s Day, when all things Irish get celebrated. Before we make another toast with a pint of smooth Guinness or whatever drinks you prefer, it’s worth taking a look at the state of the Irish economy to see how impressively the Celtic Tiger has made its roaring comeback.

According to the recently published 2016 Index of Economic Freedom, a handy cross-country annual analysis of economic policies by The Heritage Foundation, Ireland is the world’s eighth freest economy.

The Irish have taken note of their ranking:

@Heritage Foundation’s Index of Economic Freedom 2016: Ireland is the 8th most economically free country in the world #StPatricksDay

The Irish economy has made impressive progress over the past three years. Undertaking politically difficult reform measures, including sharp cuts in public-sector wages and restructuring of the banking sector, Ireland has regained its fiscal health and become the first country to exit a European Union bailout.

The Irish economy had gone through acute and painful contractions during the 2008 financial crisis and the subsequent recession. The Celtic Tiger almost went bankrupt.

Credit for the notable turnaround and ongoing recovery goes to the conscientious policy choices the Irish government has made in downsizing a bloated public sector.

Credit for the notable turn-around and ongoing recovery goes to the conscientious policy choices the Irish government has made in downsizing a bloated public sector, reducing the budget deficit, regaining fiscal health, and firmly adhering to polices to promote economic freedom and entrepreneurial competitiveness.

As documented in the index, Ireland has maintained an unusually open economy, buttressed by institutional strengths such as strong protection of property rights, efficient business regulations and competitive tax rates. Given all that, the government’s fiscal restraint has been just what was needed to unleash faster growth.

Even the International Monetary Fund (IMF) has joined in the praise, saying in a recent report that the Irish recovery remains strong and the economy is “starting to fire on all cylinders.” In an IMF conference entitled “Ireland—Lessons from Its Recovery from the Bank-Sovereign Loop,” a member of the executive board of the European Central Bank remarked that “the Irish economy has been an outstanding success over the last years and months.” The official warned against complacency but lauded the flexibility that has become the key component in Ireland’s economic rebound.

No wonder that Ireland’s economy grew by 7.8 percent in 2015, making Ireland the fastest-growing economy in the European Union for the second successive year. Time to give a toast to Ireland, indeed.

Over the course of the last decade, America has slipped precipitously from the ranks of the world’s 10 freest economies. The United States, once one of the world’s preeminent practitioners of economic freedom, now has a lot to learn—or, more accurately, re-learn—from other countries. Undeniably, Ireland seems to be one of them.