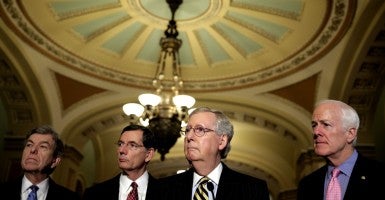 Since 2013, the GOP has consistently proposed budgets that increase spending, and not by just a little. (Photo: Joshua Roberts/REUTERS/Newscom) 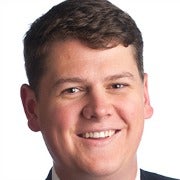 Republicans seem to have missed that message.

Since 2013, the GOP has consistently proposed budgets that increase spending, and not by just a little. Consider that the Republican budget for the 2014 fiscal year, offered by then-Budget Committee Chairman Rep. Paul Ryan, R-Wis., proposed $966 billion in base spending. This year, Speaker Ryan is pushing a budget that proposes $1.07 trillion.

That means in four years, Republicans have increased their proposal by $104 billion.

Of course, these issues are never really black and white, and there are lots of arguments that can (and will) be made about how the sequester, the filibuster, and the Democrats are to blame for this increase in federal spending.

But what is most troubling about the increased level of spending—it’s that these higher spending numbers are supported exclusively by Republicans, the party of fiscal discipline.

Consider that the president does not have to sign the budget resolution, and the filibuster does not apply to its consideration. Budget resolutions are strictly partisan affairs with almost no procedural constraints. The massive increases, therefore, cannot be blamed on anyone but the GOP.

This, by all accounts, is a shocking reality. Ryan, after all, has a prominent record of fiscal conservatism. So sterling is his reputation that 57 percent of the American people told pollsters they do not “expect House Speaker Paul Ryan and Congress to increase spending.” Why, then, are the House Republicans pushing so hard to pass a budget at $1.07 trillion? For years, they have promised to be the party that reins in the federal debt and deficit, and yet they are proposing a $50 billion year-to-year increase in their own budget.

House Republicans have lost the forest for the trees.

Frustrated by Democrats and intimidated by a complicit media, the Republican leadership is looking for a way out of the conflict that invariably comes when one tries to exert fiscal discipline. Each budgeting document is seen as an exit ramp away from a public squabble with the Democrats rather than a path forward to responsible budgeting.

Around every budgeting corner, Republican leaders see a false choice between the Democrats’ shutdown narrative and an increase in spending. Instead of acting as visionary leaders, Republicans have reduced themselves to the party that incessantly searches for a clever solution to each Democratic trap. The cost is steep; the party of fiscal discipline is now producing budgets full of runaway federal spending.

As my colleague Paul Winfree and Heritage President Jim DeMint wrote recently, the budget is an opportunity for Republicans to present a vision to the country—one that is responsible, compassionate, and prudent in its priorities and spending. A budget that increases spending by $50 billion in one year is not that vision.

As conservatives, we must demand better.