The ACLU’s Hypocrisy on Religious Liberty 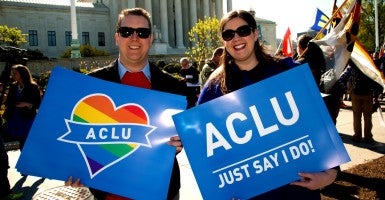 Tory McClintock is a member of the Young Leaders Program at The Heritage Foundation.

Following the Supreme Court’s redefinition of marriage in Obergefell v. Hodges, the American Civil Liberties Union (ACLU) has declared that it will no longer support the federal Religious Freedom Restoration Act (RFRA) or state analogues.

The federal Religious Freedom Restoration Act was introduced in 1993 by none other than Sen. Ted Kennedy, D-Mass., and (then) Rep. Chuck Schumer, D-N.Y.

The federal Religious Freedom Restoration Act was introduced in 1993 by none other than Sen. Ted Kennedy, D-Mass., and (then) Rep. Chuck Schumer, D-N.Y., as a direct response to the watering down of existing Free Exercise protections through Employment Division v. Smith, a 1990 Supreme Court decision. With the ACLU’s help, the Religious Freedom Restoration Act was signed into law by President Bill Clinton.

Fast-forward to today. The ACLU now says that the many liberals who supported the Religious Freedom Restoration Act, including the ACLU itself, had in fact created a license to discriminate against LGBT persons “in virtually all aspects of their lives.”

But, as explained by the Heritage Foundation’s Sarah Torre, Religious Freedom Restoration Acts do not guarantee that religious believers will win in every case.

Rather, a person or institution of faith must first prove to a judge that a government action results in a substantial burden on his or its religious exercise, and the government is then given the opportunity to show a compelling justification for its actions. The ACLU had argued for the passage of the Religious Freedom Restoration Act precisely because it struck the right balance, so it is more than ironic to now see the ACLU leading the charge against state religious freedom bills that are effectively identical to the federal law it once championed.

Since it is labeling these laws hate legislation, you would think the ACLU had purged itself of all association with these supposedly bigoted laws long ago. But you would be wrong.

In 2014, the ACLU filed a lawsuit against the U.S. Army. The Army had refused to allow a Sikh college student, Iknoor Singh, to enlist in ROTC (Reserve Officers’ Training Corps) unless he followed Army grooming and uniform regulations. This would have required him to shave his beard, remove his turban, and cut his hair. Because his religious beliefs required him not to do these things, Singh requested a religious accommodation. When the Army denied this request, the ACLU argued for Singh’s rights, quoting the Religious Freedom Restoration Act in his defense.

The ACLU filed a similar lawsuit in Texas in 2007 against a judge who demanded that a Sikh man remove his turban in a courtroom. This turban was worn because of religious beliefs—according to the former Texas ACLU legal director, “the turban signifies devotion to God, and is an integral part of a Sikh’s identity.”

The ACLU used the Texas state Religious Freedom Restoration Act to argue that the judge violated the man’s freedom of religious exercise by asking him to remove his turban. An ACLU volunteer attorney working on the case stated, “We believe RFRA’s prohibition on substantially burdening a person’s free exercise of religion clearly applies to the judge in this case.” Once more, the ACLU’s use of the Religious Freedom Restoration Act resulted in the protection of sincerely held religious beliefs.

In 2009, the American Civil Liberties Union defended a Quaker in a lawsuit against the federal government, asking it to recognize conscientious objectors when men register for the draft. Tobin Jacobrown, a Quaker, did not fill out the Selective Service forms since there was no option on the form acknowledging conscientious objectors.

For Quakers, pacifism has long been a significant religious principle, and they are not supposed to participate in any institution they feel violates that belief. Jacobrown did not register for the draft because of his religious belief as a Quaker. The ACLU’s lawsuit on behalf of Jacobrown cited the Religious Freedom Restoration Act to ask that the government recognize conscientious objectors when men register for the draft.

The ACLU has also used Religious Freedom Restoration Act protections to fight for the religious freedom rights of Muslims. In 2005, the ACLU filed a suit on behalf Americans who were returning to the country after attending a conference on Islam. Because of a special terrorism screening policy, the Department of Homeland Security detained numerous conference attendees at the U.S.-Canadian border upon returning to the United States. In the lawsuit, the ACLU said the policy implemented by the Department of Homeland Security violated the rights of conference attendees under the federal Religious Freedom Restoration Act.

These are a few of the many cases in which the ACLU has defended religious freedom under the Religious Freedom Restoration Act.

So what can possibly explain the ACLU’s change of heart when it used to rely so heavily, and so recently, on state and federal Religious Freedom Restoration Acts?

The beliefs on the current banish list include the convictions:

The common thread here is that the ACLU wants to shunt religious beliefs that in any way conflict with the current liberal orthodoxy on human sexuality—even if those religious beliefs are rooted in reasoned arguments and are shared by mainstream Christians, Muslims, Jews, and others.

Where the ACLU once defended sincerely held religious beliefs that were unpopular, it now sacrifices the religious liberty rights of millions of good-faith Americans before the altar of sexual politics. What a shame.