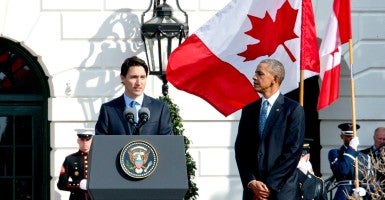 Justin Trudeau, Canada’s new prime minister, is currently visiting Washington to deepen ties with President Barack Obama and make headway on an ambitious left-leaning agenda on a wider range of issues. From an economics perspective, the summit is basically like Trudeaunomics-meets-Obamanomics, which can double the risk of undermining Canada’s economic freedom and dynamism.

Under the seven-plus-year span of the Obama economic policies of greater government spending, high taxation, heavy regulation, and government income redistribution, America’s economic freedom has notably dwindled, as is well documented in the Index of Economic Freedom and others.

The U.S. has fallen from the 6th freest economy in the world, when Obama took office, to 11th place in 2016. America’s declining score in the index is closely related to Obamanomics, which has been hurting the economic livelihood of the poor and minorities the most.

Unfortunately, Canada’s energetic and charming new Prime Minister Trudeau has been quite fond of putting in action these failed and outmoded economic policies. According to a recent Bloomberg interview:

Canadian Prime Minister Justin Trudeau is urging global leaders to rely more on government spending … to spur growth[.] … He also defended his plan to go willingly into the red. … Trudeau’s arrival on the global scene and his endorsement of deficits marks a sharp about face from his predecessor, Stephen Harper.

Indeed, he was elected promising budget deficits! As reported by Politico:

While many other western countries have embraced austerity and spending cuts, Trudeau campaigned on running a $10 billion deficit to help pay for infrastructure investments. Since taking office, his government has admitted that the deficits will grow significantly higher.

What is so (tragically) alarming is that the Canadian prime minister’s rather naïve invocation of discredited big spending Keynesian economics, which seems to be the root of Trudeaunomics, risks dissipating Canada’s fiscal prudence and putting the country’s path of economic freedom into a similar downward spiral to what the U.S. economy has endured under Obama.

Canada’s much touted recent economic success is due to its moving away from socialism, not toward it.

Canada’s much touted recent economic success is due to its moving away from socialism, not toward it. According to the 2016 Index of Economic Freedom, Canada has surpassed America to become the freest country in North America since 2010. Through moves such as downsizing government and cutting its corporate tax rate, Canada has restored economic dynamism and reduced unemployment.

And now, Trudeau seems to get closer to reversing the course and putting Canada’s progress in peril. Hopefully, after wining and dining with Obama, he’ll have a chance to think twice about his economic plans before it’s too late.