How Obamanomics Harms Obama Voters the Most 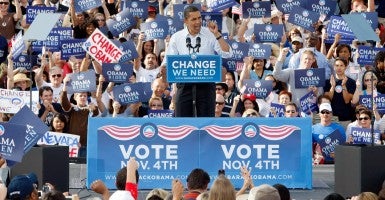 Politics is often filled with paradoxes, and here is one that nearly defies explanation. The demographic groups that voted most heavily for Barack Obama in 2012 have suffered the most from this president’s economic policies. Maybe the people in these demographic groups — blacks, Hispanics, single women and young people — are economically uninformed, or maybe for these groups, when it comes to voting, it’s not the economy, stupid.

Whatever the explanation, the facts speak for themselves: Obama voters have not benefited from his policies.

I looked at the most recent Census Bureau data as analyzed by statisticians from Sentier Research. Last month, Sentier released “Household Income on the Fifth Anniversary of the Economic Recovery: June 2009 to June 2014.” This report found, depressingly, that five years into an “economic recovery,” real median household income “is now 3.1 percent below that of June 2009 when the ‘great recession’ officially ended.” In dollar terms, real median household income fell by $1,698. So much for the Obama claim on Labor Day that “by nearly any measure, the economy is doing better.” Well, actually, for more than half of Americans, their personal financial situation is worse.

The poor and unskilled that Obama says he cares so much about saw their incomes fall by 7.4 percent for those with less than a high-school diploma

Now let’s look at who the Obama voters were in 2012 — and the numbers weren’t a whole lot different in the “hope and change” election of 2008. The demographic groups that were crucial to his victory were: young voters 60 percent (for Obama), single women 67 percent, Hispanics 71 percent and blacks more than 90 percent.

Here’s how these groups have fared economically since Obama became president. According to the Sentier research, single women with and without children present saw their incomes fall by roughly 5 percent. Those age 25-34 experienced an income decline of 4.4 percent. Black heads of households saw their income tumble by 7.7 percent, while the income of Hispanic heads of households fell 5.6 percent. In other words, many of these groups experienced double the income fall than the average voter. Crystal Caballero, who said she needs a job so she can get off welfare, holds her son as she waits in line to apply for seasonal work. (Photo: Eric Paul Zamora/The Fresno Bee/Newscom)

In dollar terms, between the time the Obama recovery began in June 2009 and June of this year, median black household income fell by nearly $3,000, Hispanic households lost nearly $2,500, and female-headed households lost roughly $1,500.

The jobless numbers show pretty much the same pattern. July’s Bureau of Labor Statistics data (the most recent available) show a national unemployment rate of 6.2 percent. The highest jobless rates by far are for key components of the Obama voter bloc: blacks (11.4 percent), Hispanics (7.8 percent), those with less than a high-school diploma (9.6 percent). For teens, it’s 20.2 percent.

In the 1980s and 1990s, it was blacks and women who had the largest percentage income gains. Now that progress in reducing racial and gender income gaps has reversed course under Mr. Obama. The income gains under Mr. Obama have been concentrated in those in the top 20 percent of income.

One reason incomes haven’t risen for most groups is the steady decline in labor-force participation. That number has dropped to 62.9 percent from 65.5 percent five years ago. This means a 6.4 million drop in workers earning paychecks.

Income redistribution isn’t an economic strategy for growth. It’s a lifeboat strategy. It would be hard to point to a single initiative the Obama administration has proposed that would help businesses grow and invest. In fact, as the Burger King fiasco documents, companies are leaving the United States owing to taxes and regulation. The poor and minorities have taken the big hit — and that’s the real injustice of Obamanomics.