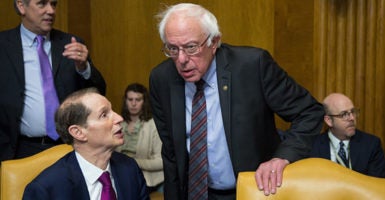 But Sen. Bernie Sanders, I-Vt., had a sharp question during the Senate Budget Committee hearing.

“How many thousands do you think will die because of massive cuts to Medicare and Medicaid?” Sanders asked Russ Vought, acting director of the Office of Management and Budget.

Several Democrats on the panel also accused the Trump administration of wanting to cut Medicare.

That’s not the case, Vought said.

“Our Medicare reforms that provide savings to lower pricing costs—and attempts to make other program integrity reforms—they push out the expiration date of the Medicare trust fund by eight years,” he told the Senate committee.

Perdue had decried federal spending that led to $22 trillion in debt and left the Medicare trust fund at zero in eight years and the Social Security trust fund projected to reach zero in 12 years.

The Social Security and Medicare trustees’ report last year projected that the Medicare trust fund would be depleted by 2026 if Congress did not reform the entitlement program.

The Trump budget proposal, released Monday, would limit what Medicare recipients have to pay for prescription drugs.

Currently, Medicare has a 5 percent co-pay for high-priced medicines that may cost as much as $1,000 per pill.

Sanders, the committee’s ranking member, took another take on the budget—and stuck with a rhetorical question.

“You obviously studied how many people would die as a result of a lack of access to health care,” Sanders said. “What kind of conclusion did you reach? How many thousands do you think will die because of massive cuts to Medicare and Medicaid?”

Vought replied that the budget outline doesn’t propose any cuts to Medicare.

“Senator, those numbers you cited are not accurate. We do not cut Medicare or Medicaid,” Vought said.

As he explained some of the reforms, he told Sanders: “There is no cut at all, because Medicare is going up each and every year.”

Trump’s $4.7 trillion budget proposal for fiscal year 2020, which projects a $1.1 trillion deficit, also asks Congress to cut discretionary spending. Lawmakers haven’t done that in recent years, even when Republicans controlled both the House and the Senate.

The proposal would cut nondefense discretionary spending by 5 percent across the board, for a total of $2.7 trillion in savings for taxpayers over 10 years.

The OMB projects a balanced budget by 2034. Deficit spending, now 5 percent of gross domestic product, would fall to 1 percent by 2029, according to the projections.

Sen. Ron Wyden, D-Ore., complained to Vought: “When I look at your budget, it offers up an almost inexhaustible supply of bad ideas for working families, for seniors, for the vulnerable.”

“We have this outrageous budget in front of us,” Stabenow said. “The administration may claim to care about women and children. There is no way that’s true, obviously. … I don’t even know where to begin with all this. I would suggest that we just throw it out the window.”

After those remarks, Perdue asked his colleagues to be serious about the nation’s fiscal problems.

“Let’s just talk about the reality here, instead of the emotion,” Perdue said. “In 2000, this government had $6 trillion of debt. At the end of President [George W.] Bush’s eight years, we had $10 trillion in debt.”

The Georgia Republican also called out the Obama administration that followed for eight years, though not by name, saying:

[After] 2016, we know what doesn’t work, because we had eight years of the lowest economic output in U.S. history.  We added more debt as a government than all prior presidents before. We doubled the debt in eight years. Now, we want to hide behind that the tax bill that made our corporations more competitive with the rest of the world, created 5 million jobs over the last two years.

Vought said interest payments on the debt are projected to exceed military spending by 2024.

He also noted that federal tax cuts have not been the cause of the government’s fiscal crisis.

“Contrary to fearful predictions before passage of historic tax reform, revenues are increasing and are in line with 50-year historic averages,” Vought said. “The problem is not that Americans are taxed too little, it is that Washington spends too much.”