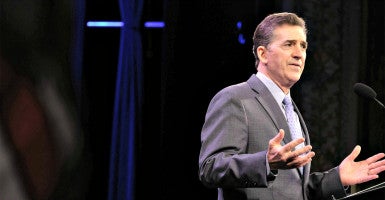 DeMint, addressing the crowd at the annual Conservative Political Action Conference, or CPAC, reflected on his own days in Congress representing South Carolina, including six years in the House and eight years in the Senate.

“I can tell you, more than a decade of frustration and disappointment by conservatives have led to outright rebellion across America against the status quo here in Washington,” DeMint said, adding:

The whole of Washington—political consultants, the media pundits—have been wrong about what Americans want, and they still don’t get it. Conservatives are sick and tired of business as usual in Washington, and we’re not going to take it anymore.

DeMint, first elected to Congress in 1999, said he decided to run for office to “move dollars and decisions” back to the American people. But, he said, he learned quickly that Republican leaders instead were more concerned with securing votes.

DeMint, who took over The Heritage Foundation in 2013, praised grassroots activists for helping to bring conservative leaders to Washington, D.C., but criticized the GOP for wanting “nothing to do” with them in 2012.

Conservatives, he said, went on to launch a nationwide effort to defund Obamacare in 2013 and helped Republicans take back the House and the Senate during the 2014 midterm elections.

“They started out to take us down, but that’s not what happened,” DeMint said, “because this force is growing rapidly. … When Republicans run on bold, positive, conservative ideas, they win.”

Without speaking specifically of the Republicans who entered the presidential race, DeMint praised candidates for “running on conservative ideas” and “standing with the hardworking, tax-paying, middle-class Americans.”

He also touted Heritage’s theme of “Opportunity for All, Favoritism to None,” saying:

If Americans know we really believe it, they will support our ideas. This is our cry. Conservatives ideas will achieve the promise of the American dream. Conservative policies will make life better for every American.

Running through Saturday, CPAC offers conservatives across the country an opportunity to gather with fellow activists and leaders for speeches, panels, exhibits, and other activities at Gaylord National Resort and Convention Center just outside Washington, D.C., at Maryland’s National Harbor.