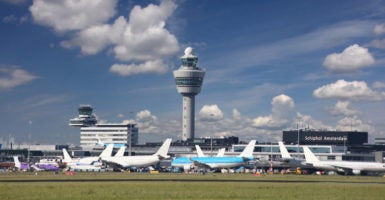 The House-proposed AIRR Act would remove air traffic control from the federal bureaucracy and establish it within a private, nonprofit entity. (Photo: iStock Photos)

While Congress has flown the coop for its August recess, the clock is ticking toward the end of the fiscal year on Sept. 30.

Sept. 30 also marks the deadline for reauthorizing the Federal Aviation Administration, a task both chambers of Congress have yet to accomplish despite passing their respective FAA bills out of committee.

The two chambers have taken starkly different approaches to the reauthorization.

The Senate’s bill simply continues the status quo while exacerbating many of the FAA’s structural problems. The House bill, on the other hand, calls for long-needed reform to the nation’s air traffic control system by removing it from the federal bureaucracy and establishing it within a private, nonprofit entity.

While the bill is not perfect, this change is long overdue and would have myriad benefits for everyone who flies.

Yet the sweeping reforms in the House bill, known as the 21st Century AIRR Act, have run up against special interests and political opportunists who look for any excuse to oppose the bill, including some Democrats in Congress.

At a glance, the latest score released by the CBO gives them that ammunition to oppose the bill.

The CBO’s latest score determined that the 21st Century AIRR Act would increase the deficit by $98.5 billion over 10 years, up from roughly $20 billion in its original estimate.

However, this score does not reflect reality. It is instead indicative of the limitations of the CBO’s scoring conventions.

To summarize the fiscal components of the bill, the 21st Century AIRR Act would change the model of funding for air traffic control.

Under the bill’s proposed American Air Navigation Services Corp., the private entity would be self-sustaining based on user fees paid by the flying public, making most of the current taxes and federal spending on air traffic control unnecessary.

While this process is straightforward, it flummoxes the CBO’s scoring process.

The first problem is conceptual. While the 21st Century AIRR Act sets up the new air traffic control corporation as a private entity that is explicitly removed from the government, the CBO continues to view the new entity as “an agent of the government” and keeps its finances on the federal budget.

While this conundrum could possibly have been avoided with a few changes to the bill, the CBO’s decision makes a mess of the issue for scoring purposes: Although the bill’s authors intended to take existing spending and revenues completely off-budget, the CBO has decided instead to reclassify air traffic control spending from discretionary spending to mandatory spending.

The difference in the way the CBO treats discretionary spending (as air traffic control spending was formerly classified), mandatory spending, and revenues lead to the seemingly large deficit figure of nearly $100 billion.

The revenue piece is easy enough: The CBO assumes that the corporation’s new user fees roughly offset the taxes that are eliminated and extends these revenue trends out in its baseline, making the revenue title effectively deficit-neutral.

This increase should be offset by a decrease in discretionary spending, as the legislation lowers future discretionary authorizations and trims the budget caps to accommodate these lower levels—similar to how the revenue pieces offset one another.

However, the CBO does not include future authorizations subject to appropriation in its score, thus making the newly reclassified mandatory spending appear to increase the deficit, when in reality it is simply replacing discretionary spending that should no longer be spent.

Even though no more money will be disbursed on air traffic control services in totality, the CBO’s base set of assumptions make the bill appear to increase the deficit because mandatory spending is reflected in the CBO score, while changes to discretionary authorizations are not.

To fix this problem, the CBO requires future appropriations changes, which cannot be included in such an authorization bill.

Jeff Davis of the Eno Center for Transportation has a useful summary table explaining the components of the misleading score: (It’s also worth noting the final deficit increase of $1.8 billion is largely due to the fact that American Air Navigation Services will be able to borrow for capital projects, thus shifting capital spending up into the short-term budget window but not meaningfully changing air traffic control capital spending in the long run).

The biggest irony lost on the detractors pointing to the CBO score is that the CBO admits this proposal will be roughly deficit-neutral once future appropriations language is passed that adheres to the authorization’s levels.

Instead of championing fiscal responsibility, detractors are deliberately using the CBO’s flawed scoring mechanism to oppose a proposal that would in fact lower federal spending. This political torturing of the scoring process is unbecoming to members of both parties and should not be used for political gain.

Common sense dictates that removing equivalent portions of taxes and spending from the budget will not meaningfully increase the deficit.

Lawmakers and their constituents should be wary of letting a misleading budget scoring process get in the way of real fiscal progress: shrinking the size and scope of the federal government.