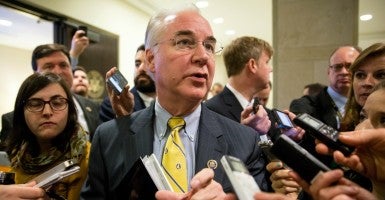 For House Republicans, the time for choosing starts Thursday.

At a GOP conference meeting, leadership plans to gauge support for adopting a new budget with old spending numbers that conservatives, among others, consider too high.

How lawmakers receive the Price budget could determine whether Congress passes a budget with 12 appropriation bills or abandons regular order again to pass a catchall omnibus spending bill later this year.

Lawmakers must decide either to keep or scrap the spending levels established in the Bipartisan Budget Act passed in October in a deal between then-Speaker John Boehner and President Obama.

Conservatives complain the Boehner-Obama budget increased spending caps by $30 billion above limits established in the 2011 Budget Control Act. And they want to reduce discretionary spending from $1.07 trillion to $1.04 trillion.

Rep. Dave Brat, R-Va., told The Daily Signal that the Price budget will “more than make up for busting those caps.”

Brat, who sits on the Budget Committee, said the document will maintain the higher spending levels but include “two years of mandatory spending reforms worth $30 billion in savings…and maybe as much as 100 billion over 10 years.”

The Price budget also includes a grab bag of conservative sweeteners such as a vote on a constitutional amendment that mandates a balanced federal budget and reconciliation options, Politico reported.

Despite Brat’s perspective, other members of the House Freedom Caucus remain skeptical.

Rep. Mo Brooks, R-Ala., hadn’t seen the details of the Price budget yet, but he told The Daily Signal he is cautious:

I’ve been through these budget cycles long enough to know that when a budget’s passed, the amount you propose to spend will always be spent, perhaps even more. And the promised offsets or spending reductions rarely, if ever, happen.

A budget is central to Speaker Paul Ryan’s plans to return the legislature to regular order in the appropriations process. In contrast to the one-and-done omnibus spending package, Congress would approve spending for individual agencies and programs one bill at a time.

Afterward, Lankford, who sits on the Senate Appropriations Committee, told The Daily Signal that while he “would love to see a lower spending number,” any reduction is not politically feasible:

Sure, you can bring another number up—the number agreed upon between the House and Senate—but you’re going to be guaranteed that you’re going to have a government shutdown or an omnibus bill.

It isn’t clear that the original spending number would get enough votes to pass out of the House.

The leadership of the Freedom Caucus and the larger Republican Study Committee promise to scuttle the Boehner-Obama spending levels.

“It seems pretty obvious that we need to address Washington’s spending problem,” Jordan told The Daily Signal. “Republicans in Congress need to unify around and pass a conservative budget that puts us on the path to balance.”

“We must make concrete spending reductions, either in nondefense discretionary spending or through enacted mandatory savings, to offset any spending in excess of $1.04 trillion,” Flores said.

The largest conference in Congress, the ranks of the Republican Study Committee swell past 170 of the 246 Republican members of the House. Its opposition to the Boehner-Obama spending levels could tip the balance against leadership.