Increasing Health and Safety Standards for Abortion Clinics Is Reasonable 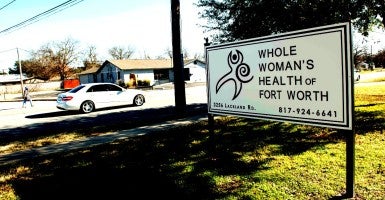 The Supreme Court will hear oral arguments this week in a case challenging a Texas law that places commonsense health and safety regulations on abortion clinics and abortion clinic doctors.

Whole Woman’s Health v. Hellerstedt involves a Texas law, known as H.B. 2, that was passed in response to the conviction of late-term abortionist Kermit Gosnell, who ran a “House of Horrors” abortion clinic for over a decade with nearly no government oversight.

After the Gosnell grand jury recommended new clinic regulations and after hearings on the medical risks of abortion, Texas (along with other states) decided to require abortion clinics to meet the same minimum cleanliness and safety standards as other outpatient surgery facilities and require doctors performing abortions to have the credentials to admit a patient to a nearby hospital.

Facing an increase in costs and oversight, the abortion industry sued but lost at the appellate level and is now hoping for a better result at the Supreme Court, which stayed enforcement of H.B. 2 while it decides the case.

What exactly do these regulations require?

Ambulatory Surgery Center (ASC) requirements are applied to facilities that perform invasive outpatient surgeries. Ambulatory Surgery Center standards ensure that these facilities have a sterile environment and proper sanitation; an adequate number of trained and qualified staffers; and the ability to address medical emergencies, emergency access, and basic fire prevention and safety.

Before passing H.B. 2, legislators received testimony from a number of medical professionals on the necessity of applying these commonsense standards to abortion facilities. Many of those testimonies are detailed in an amicus brief submitted in Whole Woman’s Health on behalf of a bipartisan, bicameral group of 121 Texas legislators.

The Association of American Physicians and Surgeons, whose membership includes thousands of physicians working in a variety of medical specialties, also wrote an amicus brief in Whole Woman’s Health, affirming that “Texas is on solid medical ground.” They write:

The Association of American Physicians and Surgeons continues:

Abortion providers argue that dozens of clinics would close, and women’s overall access to abortion would decrease, because these health and safety regulations come with costs they claim they are unable to meet.

Even if the Supreme Court affirms the lower court’s decision and allows H.B. 2 to go into effect, every major metropolitan area in Texas that currently has an abortion clinic will continue to have at least one abortion facility that meets the higher health and safety standards. This means that over 90 percent of women of reproductive age will continue to live within 150 miles of an abortion clinic that meets the higher standards.

The economics of the abortion market have been changing for some time, and an increasing number of abortions were already being performed in Ambulatory Surgery Centers before H.B. 2.

Since an estimated 200 women a year will be hospitalized in Texas following an abortion, it is also reasonable for policymakers to require physicians performing abortions to have admitting privileges at nearby hospitals.

Hospital admitting privileges generally means that a physician has the qualifications and good standing in the medical community to admit and provide care for a patient at that hospital. Experts testifying in favor of H.B. 2 explained that admitting privileges can help ensure greater continuity of care in the event of an emergency, increase communication between the abortion doctor and hospital staff, and act as a check on the general quality of doctors practicing medicine.

The Association of American Physicians and Surgeons brief continues:

[C]redentialing and privileging enhance both the safety of patients and the integrity of the medical profession. The process ensures that ‘[p]ractitioners have privileges that correspond to the care, treatment and services needed by individual patients.’ It maximizes a physician’s ability to communicate with other physicians and coordinate all necessary care for the benefit of the patient. At the same time, the process allows ‘an overview of each applicant’s licensure, education, training, current competence, and physical ability to discharge patient care responsibilities.’

Again, the Association of American Physicians and Surgeons summarizes: “Put simply, an outpatient surgical provider with the ability to admit his patients to a hospital is more likely to be a physician with the experience, integrity and ability to provide his patients with the care they need, especially in the event of unforeseen emergencies.”

These Texas provisions, and others like them, are reasonable and necessary. The Supreme Court now has the opportunity to affirm that states have a legitimate and compelling interest in better ensuring the safety and health of every woman who enters an abortion clinic.