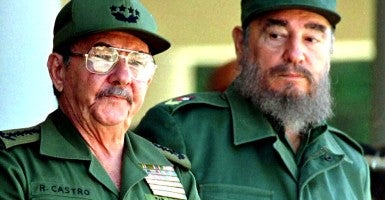 Family members of the four killed have pursued and will continue to pursue justice and have concrete results for their efforts. (Photo: Rafael Perez/Reuters/Newscom)

John Suarez is a human rights activist with the Cuban Democratic Directorate.

Even before President Barack Obama’s trip to Cuba next month, his administration has looked to rewrite the history of the Castros’ worst crimes. An example of this was in 2014, when the Obama administration commuted the double life sentence of Gerardo Hernández.

Hernández had been in jail for conspiracy to commit murder through his actions related to the 1996 downing of aircraft owned by the anti-Castro nonprofit “Brothers to the Rescue.”

Brothers to Rescue is a Miami based organization, formed by Cuban exiles, which advocates against the Castro dictatorship.

The atrocities took place in 1996, when two Brothers to the Rescue planes were shot down by Cuban jets over international airspace, killing four. Two more Cuban fighters chased a third Brothers to the Rescue plane to within three minutes of downtown Key West but failed to shoot it down. This plane returned and provided critical information on what had occurred. If it had been shot down, the Cuban government had a cover story in place to justify the shoot-down.

In order to carry out the attack, the Castro regime had a spy, who had infiltrated Brothers to the Rescue, initially pose as a survivor in Cuba to confirm the regime’s story. But this story imploded when the third plane made it back to Florida.

The objective of the Castro Regime was to destroy relief organization while at the same time taking attention away from a crackdown on a national opposition gathering in Cuba.

This was happening in the midst of a warming relationship that started in 1994, between the Clinton administration and Castro that included secret joint military exercises.

Hernández was set free by the Obama administration and was returned to Cuba the same day his sentence was commuted. Two days later on Dec. 19, 2014, Obama sought to rewrite the history of the incident, stating in a press conference that “[i]t was a tragic circumstance that ended up collapsing talks that had begun to take place.”

Historical and legal records demonstrate that Obama is wrong.

The Cuban dictatorship planned the attack by using its spy networks in the U.S. to obtain information, which allowed the Castros to carry out this act of state terrorism while also carrying out an influence operation to blame the victims in the media coverage.

On Nov. 14, 1997, U.S. District Judge James Lawrence King found Cuba guilty in civil court of planning the shoot down before the actual attack, and noted that there had been ample time to issue warnings to the Brothers to the Rescue aircraft.

A jury in criminal court presided by U.S. District Judge Joan Lenard on June 10, 2001, found Cuban spy Gerardo Hernández guilty of conspiracy to commit murder because of his role in providing information to the Cuban government on the flight plans of Brothers to the Rescue.

On Aug. 21, 2003, a U.S. grand jury indicted the two fighter pilots and their commanding general on murder charges for the 1996 shoot-down. Indictments were returned against General Rúben Martínez Puente, who at the time headed the Cuban Air Force, and fighter pilots Lorenzo Alberto Pérez-Pérez and Francisco Pérez-Pérez.

The defendants were charged with four counts of murder, one count of conspiracy to kill U.S. nationals, and two counts of destruction of aircraft. They are still at large.

There has been a lack of political will on behalf of the White House to pursue justice in the premeditated murders of these four men, but the indictments remain open.

Family members of the four killed (Carlos Costa, Pablo Morales, Mario De La Peña, and Armando Alejandre) have pursued and will continue to pursue justice and have concrete results for their efforts. Unfortunately, they face an Obama administration that is trying to downplay the actions of the hostile Cuban government.