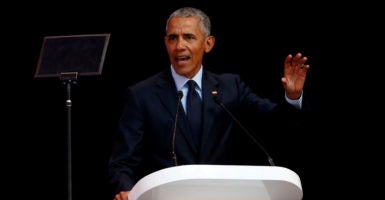 Christopher Baldacci is a member of the Young Leaders Program at The Heritage Foundation.

Historian Jacob Burckhardt once warned against being deceived by “terrible simplifiers.” If he hadn’t died in 1897, you might be tempted to think he was writing about defenders of President Barack Obama’s Deferred Action for Childhood Arrivals program.

The left consistently characterizes all DACA recipients as though they were innocent, law-abiding Phi Beta Kappa college graduates. They also treat anyone questioning DACA as a child-hater. That is just one of the myths surrounding the program.

When President Donald Trump last tried to rescind DACA, a program that Obama implemented without legal authority or the approval of Congress, liberals decried the move as an attack on peace-loving immigrants. However, new research challenges that simplistic narrative.

Recently, the U.S. Citizenship and Immigration Services did a comprehensive review of aliens who applied for benefits under DACA. Getting approved under DACA provided a period of deferred action (a promise that the alien would not be deported) as well as access to certain government benefits such as Social Security and Medicaid.

The U.S. Citizenship and Immigration Services found that approximately 8 percent of DACA beneficiaries had previously been arrested, including for crimes such assault, rape, and murder, yet were still approved.

Judicial Watch warned back in 2013 that DACA’s very limited vetting procedures were woefully inadequate, and the data has proven it right.

For those who think that, during the Obama administration, the U.S. Citizenship and Immigration Services was actually checking the backgrounds of all DACA applicants, nothing could be further from the truth. It implemented a “lean and light” system in which only a few randomly selected DACA applications were ever actually investigated, and only rarely was any of the information on the applications themselves even verified.

This new data from the U.S. Citizenship and Immigration Services contradict claims that DACA has not been a shield for criminal aliens. Director L. Francis Cissna lamented: “The truth is that we let those with criminal arrests for sexually assaulting a minor, kidnapping, human trafficking, child pornography, and even murder be provided protection from removal.”

The Center for Immigration Studies reported that, as of January, more than 2,000 individuals had their protection under DACA revoked for criminal or gang activity, including with MS-13, considered by many to be the most dangerous and brutal criminal gang in the country. Yet only 30 percent were actually deported or put in custody as a result.

Of course, those who want to treat illegal aliens as if they are legal immigrants want to ignore criminal activity both before and after individuals became DACA beneficiaries. One recent study from Arizona found that DACA-eligible immigrants made up 2 percent of the state population but 8 percent of the prison population.

The 8,000 crimes committed by DACA beneficiaries who were given the privilege of remaining in the U.S. would never have occurred if DACA didn’t exist—or at the very least if its prohibitions were actually enforced.

Obama’s unilateral executive action setting up the DACA program was beyond his constitutional and statutory authority—and dangerous.

The president was never meant to implement immigration policy with the stroke of a pen. The Constitution entrusts Congress, not the president, with the power to regulate immigration so that it can debate, deliberate, and work out the most effective solution to the country’s immigration issues.

The evidence from DACA’s actual implementation helps make sense of Congress’ refusal to pass the DREAM Act, which is DACA’s legislative equivalent. Like DACA, this legislation would be unfair to legal immigrants—those who abide by the rule of law when they come to America—and it would reward illegal behavior, acting like a magnet to draw in even more illegal aliens.

Congress, not the president, has the final word on this issue. And the No. 1 concern of Congress should be ensuring the safety of the American people.