What John Oliver Got Wrong About Abortion Laws 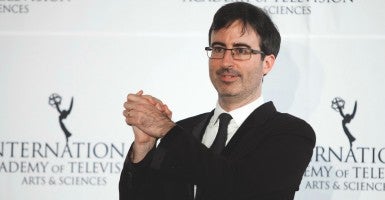 All Americans, on either side of the abortion debate, should support elevating the health and safety of women. (Photo: Carlo Allegri/Reuters/Newscom)

The brunt of Oliver’s mocking attack was aimed at a 2013 Texas law that is currently being reviewed by the Supreme Court. The law, known as H.B. 2, in part requires doctors performing abortions to have admitting privileges at nearby hospitals and abortion clinics to meet the same basic safety and cleanliness standards as other facilities that perform invasive outpatient procedures.

Abortion Clinics Should Have High Health and Safety Standards

Regulations like H.B. 2 are common sense and much-needed policy measures. The dangerous, unsanitary conditions of Philadelphia late-term abortionist Kermit Gosnell’s “house of horrors” shocked the nation when they came to light during his 2013 murder trial.

Importantly, Gosnell’s clinic—though one of the more horrific—is not an outlier in the abortion industry.

As Mailee Smith, attorney for Americans United for Life, explains: “Over the last six years, more than 175 abortion providers in at least 30 states and DC have faced investigations, criminal charges, administrative complaints, and civil lawsuits related to the provision of abortions.”

Indeed, as amicus briefs in the Texas case detail, some abortion facilities in the state failed to meet sanitation, staffing, and emergency preparedness requirements—even before passage of H.B. 2.

Oliver and many other supporters of abortion would have Americans think that an abortion is not much more complicated than having a cavity filled.

But they are wrong. Surgical abortion is an invasive surgical procedure, and like any other invasive procedure, it comes with risks.

Even the National Abortion Federation, whose mission is to “ensure safe, legal, and accessible abortion care” notes the risks of abortion. National Abortion Federation’s 2015 Clinical Policy Guidelines acknowledge that abortion patients “are at risk for exposure to blood borne pathogens and other potentially infectious material,” that “all instruments entering the uterine cavity must be sterile,” and recommend that protocol should be in place for “bleeding, perforation, respiratory arrest/depression, anaphylaxis, and emergency transfer.”

Medical professionals who testified during consideration of H.B. 2 likewise detailed the risks of both surgical and medication abortion, noting that some complications will require follow-up care at a hospital.

In Texas specifically, hundreds of women are hospitalized each year after having abortions. The American Association of Pro-life Obstetricians and Gynecologists, along with other medical groups, explains in a brief in the Supreme Court case over the Texas law:

“The overall hospitalization rate following elective abortion (one in three hundred patients) is similar to rates for other invasive outpatient procedures such as liposuction, gastrointestinal endoscopy such as colonoscopy and upper endoscopy….Thus, for a year such as 2012 in which Texas reported 68,298 abortions, the state should expect to see approximately 204 abortion patients hospitalized for complications.”

That hospitalization rate is similar to statements made by Planned Parenthood of Greater Texas in an earlier legal challenge to H.B. 2 where it “conceded that at least 210 women in Texas annually must be hospitalized after seeking an abortion.”

The chance of serious complications (and hospitalization) for abortion is relatively low. But when complications do occur, they can be serious. Just ask the 3,348 women who were injured, physically and psychologically, by abortion procedures who filed an amicus brief in the Texas case. Some of those women faced serious infections, perforated organs, and the inability to have children later in life after having abortions.

Before passing H.B. 2, the Texas legislature heard many hours of testimony from medical experts explaining that the higher health and safety standards can improve patient health outcomes.

Experts testifying in favor of H.B. 2 explained how admitting privileges (meaning a doctors has qualifications to admit and care for a woman at a nearby hospital) help ensure greater continuity of care in the event of an emergency, increase communication between the abortion doctor and hospital staff, and act as a check on the general quality of doctors practicing medicine.

For instance, Dr. Jim Mauldin, a physician specializing in obstetrics and gynecology, testified:

“[I]t’s the responsibility of every surgeon to continue to care for their patient when complications arise from procedures that they perform and there will always be complications. That often requires hospitalization and in which case having antibiotics or even further surgery is necessary. Without hospital privileges, other physicians are left to take care of an abortion provider’s most serious complications. By requiring privileges, not only would there be continuity of care but the peer review processes of the hospital would be brought to bear and ensure quality.”

The ambulatory surgical centerrequirements as applied to licensed abortion facilities in Texas include:

“I support raising the standards for abortion facilities to those of ambulatory surgical centers, because part of the standard of care means not only being available to diagnose, but being able to handle significant complications following an abortion. Hemorrhage and incomplete abortion, for example, should be handled in a hospital or ASC setting. I would only perform a dilation and curettage after a miscarriage in a hospital or ASC setting, because that is the standard of care women deserve. Women receiving elective abortions deserve no less.”

At one point, Oliver states “abortion can’t just be theoretically legal, it has to be literally accessible.” Oliver, like many abortion supporters, expresses apocalyptic fears for what will happen if laws like the one in Texas lead to higher costs for abortion clinics, ultimately resulting in having fewer of them.

In reality, women will still be able to access abortion even if the Texas law is upheld.

If the Supreme Court affirms the lower court’s decision and allows H.B. 2 to go into effect, over 90 percent of women of reproductive age will live within 150 miles of an abortion clinic. Every major metropolitan area in Texas will continue to have at least one abortion facility and Texas will still have 430 ambulatory surgical centers, many of which could begin performing abortions in compliance with the law, or abortion clinics could simply accept any additional upfront costs as the price of women’s safety.

Besides, abortion clinics closing their doors may have to do with the decreasing demand for abortion (and increasing market share of Planned Parenthood, the national leader of the abortion industry) more than their resistance to meeting higher health and safety standards.

Abortion Clinics Shouldn’t Be Exempt from Health and Safety Laws

More importantly, the supposed right of a woman to get an abortion is not a right of abortion providers to be exempt from health and safety regulations.

Even as the Supreme Court invented a constitutional right to abortion in 1973 in Roe v. Wade, the justices were clear that the decision does not preclude states from placing reasonable requirements on abortion doctors and clinics (just like they would with any other medical procedure). Specifically, the Supreme Court found:

“The State has a legitimate interest in seeing to it that abortion, like any other medical procedure, is performed under circumstances that insure maximum safety for the patient. This interest obviously extends at least to the performing physician and his staff, to the facilities involved, to the availability of after-care, and to adequate provision for any complication or emergency that might arise.”

Just because some abortion clinics say they might close under commonsense health and safety regulations does not mean the standards themselves are unconstitutional. In Planned Parenthood of Southeastern Pennsylvania v. Casey, which upheld a number of regulations on abortion, the Court specifically noted: “[n]umerous forms of state regulation might have the incidental effect of increasing the cost or decreasing the availability of medical care, whether for abortion or any other medical procedure. The fact that a law which serves a valid purpose, one not designed to strike at the right itself, has the incidental effect of making it more difficult or more expensive to procure an abortion cannot be enough to invalidate it.”

All Americans, on either side of the abortion debate, should support elevating the health and safety of women, and the Supreme Court should recognize state’s legitimate interests in doing so.

Because saving the health or life of even one woman is no laughing matter.