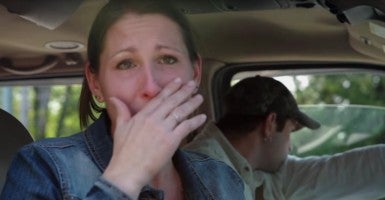 Aaron and Melissa Klein, owners of Sweet Cakes by Melissa, obtain new lawyers as they move onto the appellate level. (Photo: The Daily Signal)

Aaron and Melissa Klein, the Oregon bakers who were ordered to pay $135,000 for refusing to make a cake for a same-sex wedding, have assembled a new legal team to take their case through the appeals process.

The Kleins are now being represented by attorneys at First Liberty, a law firm that specializes in cases involving religious freedom. Joining their team is Boyden Gray, former White House counsel under President George H.W. Bush and U.S. ambassador to the European Union.

“They’ve assembled a world-class team of appellate attorneys including Boyden Gray,” Jeremy Dys, a senior counsel at First Liberty, formerly known as Liberty Institute, told The Daily Signal. “When you get a man of his caliber who’s joining their legal team, it says a lot about not only the importance of the case, but the likelihood of success.”

Aaron and Melissa Klein were previously being represented by Anna Harmon, Herbert G. Grey and Tyler D. Smith, who will all be staying on as local counsel. Dys told The Daily Signal that “it’s common for clients to put together a new legal team when they move on to the appellate level.

Aaron Klein said he’s hopeful their new legal representation will “make a difference” as they move through the appellate courts.

On July 2, 2015, Brad Avakian, commissioner of the Oregon Bureau of Labor and Industries, ordered the Kleins to pay $135,000 for the emotional, physical, and psychological damages they caused a lesbian couple, Rachel and Laurel Bowman-Cryer, for refusing to make a wedding cake.

In declining the order, the Kleins cited their religious beliefs about marriage. In 2014, the Oregon Bureau of Labor and Industries found “substantial evidence” that the former owners of Sweet Cakes by Melissa discriminated against the lesbian couple.

Dys confirmed to The Daily Signal that some of that money came from the the thousands of dollars that people contributed to their cause via crowdfunding sites like Samaritan’s Purse.

“Some of that has been used to pay the penalty from Oregon to make sure that we’re able to have the appeal to move forward. That was kind of a prerequisite step in order to go forward,” Dys said.

Although Aaron said the process where the state “wiped out our bank accounts” was difficult for the family of seven, they were able to get “back and running” within a month.

Melissa added that she’s thankful for the many contributions that came in from across the country.

“I would definitely want to tell everybody that did give to us that we are just so thankful and so overwhelmed with so many people’s generosity,” she said.

The Kleins said they intend to go as far as necessary to protect religious liberty not just for themselves, but for all Americans. Their new attorney, Dys, said that with their case, “everybody’s religious liberty is at stake.”