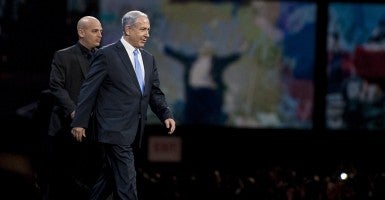 A much-anticipated speech by Israel’s prime minister to a joint meeting of Congress on the nuclear threat posed by Iran gave prospective Republican candidates for president an opportunity, and many of them took it.

By the time Israeli Prime Minister Benjamin Netanyahu begins his address today at 11 a.m. EST (about 6 p.m. in Israel), these White House hopefuls expected to be able to say that they—in spirit, anyway—stood beside and welcomed him.

“Let’s not turn our back on Israel. Let’s listen to Netanyahu and what he has to say.”[email protected]

In recent days, most of the likeliest GOP presidential contenders spoke out in public or through social media in ways designed to present themselves as staunch supporters of Israel.

“He travels here next week not to offend our president,” Fiorina said, “but to remind us that insistence on a deal with Iran at any costs is a danger to the world.”

The cheering crowd rose to its feet for the only Republican woman openly considering seeking the presidency.

Yes! RT @netanyahu I'm determined to speak before Congress to stop Iran. RETWEET if I have your support. pic.twitter.com/QmkIzlJToF

CPAC provided an effective stage for such rhetoric even as a mounting number of Democratic lawmakers planned to skip the Netanyahu speech because the House’s top Republican, Speaker John Boehner, didn’t first consult with President Obama.

But some, including Sen. Marco Rubio, R-Fla., early on talked about the importance of a show of unity with Netanyahu:

Today I asked my colleagues to #standwithIsrael and not boycott speech by @IsraeliPM @netanyahu Watch here: http://t.co/8Nri4ejoPn

Jeb Bush, the former Florida governor and the son and brother of the two most recent Republican presidents, spoke Friday at CPAC about the threat that Iran and Islamic terrorists pose to Israel’s existence. Bush had hailed the news that Netanyahu would come to Washington at Boehner’s invitation.

“I for one am really eager to hear what he has to say,” Bush said after a Feb. 18 speech in Chicago.

That sentiment resulted in an exchange of pleasantries between the former governor and the prime minister over Twitter.

.@netanyahu You’re welcome Mr. Prime Minister, I’m anxious to hear what you have to say!

Boehner’s invitation to Netanyahu occurred as the Obama administration pursued a softer tone with Iran in hopes of a deal halting its progress toward a nuclear weapon. The White House pointedly said Obama would not meet with the Israeli leader.

“My speech [to Congress] is not intended to show any disrespect to Obama or the esteemed office that he holds—I have great respect for both,” Netanyahu said yesterday in an address in Washington to the annual American Israel Public Affairs Conference, or AIPAC, the pro-Israel lobbying group.

However, the prime minister said, he has a “moral obligation” to heighten attention to Iran because it has “vowed to annihilate Israel, and if it develops nuclear weapons, it can achieve that goal.”

Former Sen. Rick Santorum of Pennsylvania, a veteran of the 2012 race who would bring strong foreign policy credentials to the 2016 contest, has been tweeting his solidarity:

America must #StandWithIsrael and our Arab allies to prevent a nuclear-armed Iran. http://t.co/RO91sI7FeU

Former New York Gov. George Pataki couldn’t resist a poke at Hillary Rodham Clinton, the Democratic favorite for president, who clashed with Netanyahu when she was secretary of state:

CPAC, the largest annual gathering of conservative activists, was held outside Washington, D.C., this past Wednesday through Saturday.  Below is what other would-be Republican successors to Obama had to say there about standing with Netanyahu and Israel.

Retired neurosurgeon Ben Carson: “Let’s not turn our back on Israel. Let’s listen to Netanyahu and what he has to say,” Carson said as the first GOP hopeful to take the CPAC stage, adding: “We need to recognize that the Shia in Iran are every bit as dangerous, perhaps more dangerous [than ISIS].”

Let's not turn our back on Israel. Let’s listen to #Netanyahu and what he has to say. http://t.co/K0yPaAy2jR #BenCarson

Wisconsin Gov. Scott Walker: “We need a leader who will stand with Israel,” said Walker, who also penned a commentary on the subject for National Review Online. “We need a leader who understands that when the prime minister and leader of our long-time ally asks to come to Congress to share his concerns about Iran, we should show him and his country our respect. We need to show the world that in America, you have no better ally and no greater enemy.”

My column on @NRO today "Standing with our friends, standing up to our enemies" http://t.co/HbxrdCUNEU

Sen. Ted Cruz of Texas: “There’s not a single Democrat here. It’s almost like CPAC invited Benjamin Netanyahu to speak,” Cruz joked to the conservative crowd as he took the stage.

Proud to stand with Prime Minister Netanyahu, with the nation of Israel, and against a nuclear Iran! pic.twitter.com/BMnzsa0Cpw

“Around the world, because of the Obama-Clinton foreign policy, our allies no longer trust us and our enemies no longer fear us,” Rubio, who sits on the Foreign Relations Committee, said. “The Obama administration treats the ayatollah of Iran with more respect than the prime minister of Israel.” He called the administration’s hoped-for deal with Iran “the Obamacare of the second term.”

We shouldn’t be treating the Ayatollah of Iran with more respect than @IsraeliPM. #StandWithIsrael —> http://t.co/To0O15buEi

Former UN Ambassador John Bolton: “Barack Obama has had the worst relationship with Israel of any American president since the state of Israel was created in 1948,” Bolton told CPAC. “I congratulate Speaker Boehner for inviting this ally to speak to a joint session of Congress. Obama’s reaction is reprehensible, and if Hillary Clinton is ever to show any daylight between her foreign policy and Barack Obama’s, she should welcome Netanyahu here and offer to work with him.”

#Netanyahu is in DC, but Obama and Biden are missing. We're trying to track them down and make them listen. pic.twitter.com/FzNgcY0ClD

Former Texas Gov. Rick Perry: “Here’s the simple truth about our foreign policy: Our allies doubt us and our adversaries are all too willing to test us,” he said, adding that the U.S. not only must back Israel but not “grant Iran’s nuclear ambitions diplomatic cover.”

.@GovernorPerry calls on the Obama administration to stand with #Israel http://t.co/jsAC8F6en1 #tcot

Real estate developer Donald Trump: “Iran… they cannot have a nuclear weapon, and we must protect Israel,” Trump said. “I would stand with Israel… there wouldn’t need to be speeches behind my back.”

"We must protect Israel." –@realDonaldTrump

Americans need to know the Iranian threat is not unique to Israel #FTN #StandwithIsrael #ImwithMike pic.twitter.com/qoYZ0R30ip

This post has been modified, including to specify time and venue.