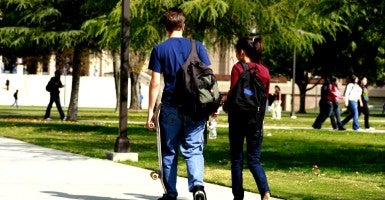 Aside from the subsidy/cost issue, there are many other reasons why this is bad public policy. (Photo: istockphoto)

Several politicians have recently been offering free goodies to voters. One of the most popular of these, oddly enough, is something that several state governments have already tackled: free college tuition.

The details vary by state, but Oregon, Tennessee, Georgia, Michigan, and Louisiana (among others) all use tax dollars to pay for at least some of their residents’ college tuition.

Louisiana provides a great case study for advocates of similar federal policies. Louisiana just so happens to be in the news right now because the governor is threatening to suspend his state’s version of free college tuition for everyone.

Louisiana’s plan is called the Taylor Opportunity Program for Students, or, more commonly, TOPS. This extremely popular program uses tax dollars to pay full tuition (and some fees) at any of Louisiana’s public universities. Other than residency requirements, all high school students qualify as long as they have a C average (2.5 GPA) and at least an 18 on the ACT.

So the Taylor Opportunity Program for Students doesn’t cover every student’s tuition, but it ends up covering it for a large chunk of middle-/upper-class families.

The program started out in the late 1980s as the brainchild of oil tycoon/philanthropist Patrick Taylor. The program, which wasn’t originally named for him, started out as a tuition assistance plan only for low-income individuals.

In 1997 the state removed the income caps. At that point, all Louisiana students, regardless of financial need, were made eligible for “free” tuition at any Louisiana public college. Once in college, students had to maintain a C average to keep their TOPS awards.

As of 2010, approximately 70 percent of Louisiana’s high school graduates headed to college within one year. That’s nearly 20 percent higher than the rate in 2000.

Who’s Paying for It?

It’s easy to call the program a success because of this increase, but it’s just as easy to point out that the program doesn’t really provide free education. In one way or another, someone pays for it.

In one way or another, someone pays for it.

The eventual implosion of the program was easy to predict back in 1997 for the same reasons that pretty much any similar subsidy is destined to fail. Subsidies don’t really lower the cost of products and services; they only lower the up-front price that some people pay.

(In 1997, this program inspired my very first public critique of a government policy. Back then, I thought it was a terrible idea.)

No Such Thing as Free Tuition

A person receiving “free” tuition may not see it (or even care), but subsides actually raise the total cost of an education. The core problem is that they remove the paying customer—in this case the student—from the equation.

Without the subsidy, the paying customer receives the direct benefit for the service and bears the direct cost. If that person doesn’t think the cost is worth it, they don’t pay.

Louisiana’s program replaces this paying customer with groups of government officials. These officials neither receive the direct benefit nor endure the direct cost of obtaining an education. These groups do, however, benefit a great deal from obtaining more of your tax dollars.

And they rarely bear any direct cost from either increasing your taxes or delivering a substandard education product. (The incumbency rate is fairly high for politicians.)

On a practical level, Louisiana’s program converts tuition payments into a state budget item. In other words, a large chunk of each school’s “tuition” becomes nothing more than revenue sent in by the state bureaucracy.

In Louisiana, four separate higher education systems—each its own bureaucracy—fight over these “tuition” payments. Smaller schools inevitably get the smallest shares, but that’s kind of another story.

A Burden on University Resources

When the influx of students hits—more people going to school when tuition is “free” is pretty much a foregone conclusion—it strains universities’ existing resources. So the transfer of money has the natural tendency to lead to expanded facilities, faculty, and staff.

But these increases call for a permanently higher level of funding, and all of these effects tend to reinforce each other. That is, school officials have a built in reason to ask for larger transfers, and politicians have a built in excuse to raise taxes.

When the state’s coffers are not flush with cash, the schools’ budgets get cut. Thus, universities have every incentive to raise more money from students who are not a part of the Taylor Opportunity Program.

Of course, for any given level of Taylor Opportunity Program students, a higher posted rate of tuition results in a larger transfer from the state. If the program covered full fees and tuition for literally every student, then taxpayers would bear the full cost. But it doesn’t, so non-TOPS students bear some of the cost.

(Pretty much every student ends up paying higher fees directly, too, but that’s almost an aside.)

Non-subsidized markets don’t work this way—prices can actually fall in response to changes in demand and supply. Subsidized systems, on the other hand, are destined to result in higher—not lower—tuition.

Recent numbers support this explanation. The Taylor Opportunity Program has nearly doubled in cost since 2008, and most of that increase has been due to higher tuition.

What I failed to fully appreciate in 1997 was how bad of a deal the Taylor Opportunity Program would end up being for the smaller schools. Then I spent almost a decade teaching at Nicholls State University, a regional state school in Thibodaux, La.

In one sense, the Louisiana program amounted to a cruel trick for these institutions. Smaller schools are the ones least able to sustain the permanently higher costs associated with the new TOPS-generated revenue stream.

When the state budget goes south—and it always does in Louisiana—smaller schools get slammed. (Louisiana State University has more than 25,000 students, so small changes in per-student fees go a long way).

No matter how much we want it to, subsidizing something simply doesn’t make it more cost-effective.

The Taylor Opportunity Program does give certain people a better deal on tuition at one point in time, but then it makes up for it somewhere else.

Ironically, the earlier waves of Taylor Opportunity Program graduates are among those about to get hit with a tax increase. That’s what politicians mean by free.

Ironically, the earlier waves of Taylor Opportunity Program graduates are among those about to get hit with a tax increase. That’s what politicians mean by free.

Aside from the subsidy/cost issue, there are many other reasons why this is bad public policy.

First of all—and I know this sounds crazy—everyone should not go to college. Some people simply aren’t cut out, and many just don’t need to. Yes, people with college degrees tend to earn more than those without, but it does not follow that everyone should go to college.

When the program was started, Louisiana public universities offered students a good value because they were relatively inexpensive. Now that Louisiana taxpayers have spent more than $2 billion on the program, tuition rates are out of reach for many students that don’t qualify for the program.

While the best solution for Louisiana would be to get rid of the program altogether (unlikely since politicians love the program), the best residents can hope for now is an increase in the program’s academic standards and some form of means testing. At least these changes would better direct subsidies to academically prepared students with more financial need.