How Louisiana Undermined Its Own School Choice Program 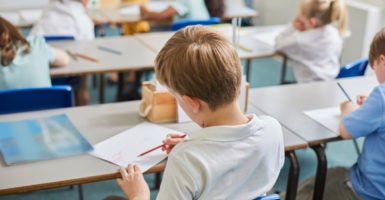 “You couldn’t learn. There was so much bullying. Kids are bullying the other kids and they’re bullying you,” said Willie Augustus, who was relentlessly bullied in his public school in Louisiana.

His parents unsuccessfully fought with the school board to address the school bullying. Eventually, they applied for and received a voucher for Willie to attend a private school of their choice in Baton Rouge through the Louisiana Scholarship Program.

Willie’s story is not unique. Thankfully, school choice enables hundreds of thousands of children throughout the country to find safe and effective learning environments that are the right fit for them. And many parents are pursuing this out of a concern for school safety.

Louisiana ranked dead last in overall performance and 49th in education, according to U.S. News & World Report’s “Best States 2018.” So it’s no surprise that many low-income families jumped at the opportunity to participate in the Louisiana Scholarship Program.

The program provides low-income families with a scholarship averaging $6,000 to pay for tuition at private schools that are compliant with state regulations. Many parents see this as a way for their kids to attend a school that’s a better fit, offers superior education, and provides a safer environment.

That’s what happened for Willie. Everything changed when he received a state scholarship to Angels Academy. “Once we found that right school, Willie blossomed into a whole other person,” said Willie’s mom.

Willie’s story of improved safety is a common theme with Louisiana’s scholarship program. Yet on testing measures, the program has produced lackluster results. This has come as a surprise to some observers, since similar private school choice programs across the country have strong records of improving both school safety and academic outcomes (see Wisconsin, for example).

Louisiana Scholarship Program evaluations found that voucher participants on average scored lower than their peers in public schools on the state test, especially in math.

Those who oppose the program blamed its shortcomings on parents for being unable to make good education choices for their children.

As Jarvis DeBerry, a columnist at The Times-Picayune, commented, “Lawmakers insisted those schools give voucher recipients the same tests public-school students take. Because they did, it’s been clear for years that parents aren’t the best judges of a school’s educational quality.”

Not only is such an assessment condescending to parents, it’s incorrect.

New research suggests that the state’s heaviest-in-the-nation regulatory regime, lauded as a measure of academic accountability, could be at the root of the program’s problems.

Moreover, private schools cannot use a selective admissions process to determine if the school is a good fit for the voucher recipient.

Patrick J. Wolf, a professor at the University of Arkansas, argues that Louisiana’s regulations homogenize private and public schools.

Wolf contends that since schools have to participate in state testing to qualify for the Louisiana Scholarship Program, the schools are incentivized to align their curricula with state norms and the public school system, which is not necessarily high-quality.

This type of regulation essentially forces private schools to teach for the state test.

Many Louisiana private schools knew that participating in the program could have meant sacrificing their distinctive school cultures and curricula—making them no different than their public school counterparts—and negating the “choice” in school choice. Consequently, only one-third of Louisiana’s private schools chose to participate in the program.

Although there is no universal measure of private school quality, Wolf noted that schools most likely to participate in the scholarship program were “low-quality schools” that already struggled with enrollment, as evidenced by student attrition prior to entering the program.

These are the same type of regulations that Louisiana lawmakers use to measure the Louisiana Scholarship Program.

The fact is that private schools oppose regulations that destroy their distinctive culture, environment, and learning approaches.

Louisiana’s burdensome regulations may have doomed excellence in the state scholarship program from the start by dissuading the best private schools from participating. And paradoxically, the regulations—designed ostensibly to create “accountability” for schools participating in the voucher program—encouraged lower quality private schools to participate, and limited families’ access to the best schools in the state.

States that are serious about providing real choice in education should remember that a flourishing market of options driven by parents will provide more accountability and quality than heavy-handed regulations ever will.

As an increasing number of states work to free education from the monopoly system that has hindered educational excellence for a century, Louisiana’s experience should remain front and center.