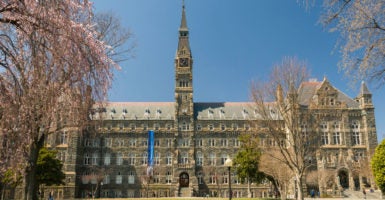 What’s so controversial about Catholics believing Catholic teaching? A lot, according to some students at Georgetown University.

In a clash that’s gotten nationwide attention, the campus’ liberal wing has been fighting to defund a conservative club that’s dedicated to ending the hook-up culture, fighting promiscuity, and defending natural marriage.

And while these should be no-brainers for a Catholic institution, the forces of political correctness have been hard at work, trying to marginalize the Love Saxa group for upholding the school’s own beliefs.

In the wee hours of Friday morning, the majority of the Student Activities Commission seemed to recognize the ridiculousness of calling the club a “hate group,” voting 8-4 to keep the modest $250 stipend flowing.

>>> A Traditional Marriage Student Group Has Been Branded a ‘Hate Group’

Prominent Catholic and Protestant leaders have weighed in on the absurdity of the left’s crusade, including Robbie George, a friend of the Family Research Council and law professor at Princeton University.

“The illiberal—even authoritarian—spirit infusing the effort to defund Love Saxa at Georgetown ought to be a matter of grave concern for honorable people across the ideological spectrum,” he argued.

And while last week’s victory was a relief, it’s not the end of the debate. “The decision by [the Student Activities Commission] not to recommend further action against the group punts the final decisions into the hands of Georgetown’s administration,” Family Research Council’s Kelly Marcum explains.

Speaking as a graduate of Georgetown, and as a founding board member of Love Saxa, I wish I could say that I had more trust in my alma mater to handle this matter in a manner befitting our nation’s oldest Catholic university. … Love Saxa won its hard-fought battle for recognition in 2015, but now it is on trial once again, though it won the first stage with the vote of [the Student Activities Commission] earlier today. However, what is really being tested is the ability for Georgetown students to participate in a group whose mission seeks to defend what for many of its members are closely held moral and religious beliefs.