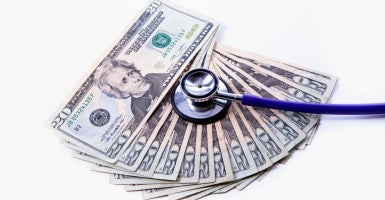 In 2016, the average premium for an employment-based health insurance plan will be about $6,400 for single coverage and $15,500 for family coverage, a report by the Congressional Budget Office says. (Photo: Ingram Publishing/Newscom)

Rising health insurance premiums under Obamacare will continue to hit Americans this year, according to a new report from the Congressional Budget Office.

“High and rising premiums for private health insurance are a matter of concern for [Obamacare] enrollees. They also affect the federal budget, because the federal government subsidizes most premiums—directly or indirectly—at a cost of roughly $300 billion in fiscal year 2016,” the CBO said.

The nonpartisan agency and the staff of Congress’ Joint Committee on Taxation projected that in 2016, “the average premium for an employment-based insurance plan will be about $6,400 for single coverage and about $15,500 for family coverage.”

By 2025, they predict, average premiums for employment-based coverage will cost about 60 percent more than this year under the Affordable Care Act, popularly known as Obamacare.

Average premiums for individually purchased coverage aren’t expected to be as high, “mostly because nongroup coverage is less extensive and thus requires enrollees to make higher out-of-pocket payments when they receive care,” according to the Feb. 11 report.

The CBO, a nonpartisan agency, produces “independent analyses of budgetary and economic issues to support the congressional budget process.”

“Notwithstanding the exemptions, the [individual] mandate significantly reduces average premiums … by encouraging healthier people to obtain insurance, which lowers average spending on health care among the insured population,” the CBO and Joint Committee on Taxation found.

However, the report says Obamacare regulations still will “increase premiums noticeably in the nongroup market,” and those affected represent only a small fraction of the private insurance market.

A 2009 analysis by the CBO and Joint Committee on Taxation found that regulations similar to those of the Affordable Care Act would increase nongroup premium costs by 27 percent to 30 percent this year, “although other provisions would have reduced premiums.”

“This was their stance in 2009 and little has changed, as we observe increased premiums in the [insurance] exchanges and rising deductibles in many types of insurance,” Drew Gonshorowski, a senior health policy analyst at The Heritage Foundation, told The Daily Signal.

“The CBO again reaffirms that regulations within the [Affordable Care Act] drive up premiums,” Gonshorowski said.

The report also notes that the increase in premiums will cause employment-based insurance tax exemptions to cost more than $250 billion in fiscal year 2016 and about $40 billion for those who buy on Obamacare’s insurance exchanges.

If Congress eliminated the benefit mandates and requirements, the researchers estimated, “premiums for younger adults could be reduced by as much as 44 percent, and premiums for preretirement-age adults could decrease by about 7 percent.”