Why Identity Politics Is Causing a War Among Feminists 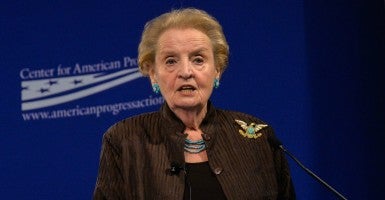 Old-school feminists are not happy with young women these days. Seemingly commenting on why some young women favor Bernie Sanders over Hillary Clinton, feminist icon Gloria Steinem explained it is because they were thinking, “Where are the boys?”

Clinton supporter Madeleine Albright also is none too happy with “women who don’t help out other women” (presumably those who do not support Clinton), suggesting there’s a “special place in hell” waiting for them if they don’t.

What’s going on here? One explanation is that younger women are tired of their Baby Boom parents (and grandparents) scolding them for being ideologically impure. Most millennials are socially liberal, but they also don’t like being lectured constantly about how to think and behave.

They have been told for a very long time that feminism is defined by a very strict set of rules, and if they fall short, well, there’s Albright’s special place waiting for them.

Talk about sounding like an old fire and brimstone preacher!

There’s a civil war brewing inside the church of radical multiculturalism.

But there’s something else going on as well. There’s a civil war brewing inside the church of radical multiculturalism. The proliferation of specially protected groups is getting awfully confusing, and battles are breaking out over power and privilege in the ranks.

As I explain in my upcoming book, “The Closing of the Liberal Mind: How Groupthink and Intolerance Define the Left,” it has to do with a complete misunderstanding of equality:

In practice, identity and equality work against each other. The more the former is pushed, the more the doctrine of equality is Balkanized. It becomes a contest between competing demands for recognition and privilege. For example, when feminist-lesbian activists take umbrage at a transgender man trying to transform himself into a woman (as a feminist did in The New York Times op-ed), they reveal they are more concerned about who gets to decide what those identities are than about the principle of equality. Even Germaine Greer, the Australian-born icon and inspiration for many of America’s most ardent feminists, is being called “transphobic” for questioning transgenderism. The lesbian feminist wants full equality with men, but only for those who are actually born female. For all the talk of equality defined by identity, in the face of transgenderism some feminists are forced into a separatist position—i.e., to defend what makes them distinct. Separatism is the only line of defense left against transgender men who are encroaching on their territory.

The same thing is happening in black identity politics. At the University of Missouri and elsewhere, black activist students are demanding a “black only healing space” devoid of white people. In other words, diametrically contrary to the once civil rights dream of racial integration, they are demanding racial separation.

This appeal to separatism is no accident. It’s built into the logic of radical multiculturalism, especially in its offshoot, identity politics. The claim is not about the equality of identical things, like, for example, that a woman or black person should be treated equally because they are equal human beings (as opposed to being merely black or female).

Rather, it is about pretending that things that are fundamentally different should be treated by society as if they were exactly the same. For example, gay activists lobby to change our perceptions of marriage precisely because the same-sex relationship is not the same thing as a traditional marriage. We must pretend as if it were the same for the sake of “equality,” but gay marriage is not about two similar things being unfairly treated as different. It’s about relabeling dissimilar things as identical.

Ultimately, the casualty of such thinking is not only the corruption of the concept of equality, at least as it has been understood for centuries by liberal thinkers. It is also the abolition of humanity as a commonly shared identity.

Civil rights used to be about striving for a common humanity. Radical multiculturalism is the opposite. It means to break humanity down into competing gender, racial, and sexual preference groups and then to pretend that our humanity is defined only by our membership in that singular group. Nothing could be farther from how civil rights leaders like Martin Luther King Jr. viewed equality. To him, black people were deserving of equality because they were human beings, not because they were black.

In order to make this new social fiction work, we need to use the power of law and the administrative state to force the new social reality on society. And it is precisely in that action that the competition for power and privilege becomes a source not of liberation, but of coercion.

As I further explain in The Closing of the Liberal Mind:

Without a respect for all human beings, regardless of their place in the identity pecking order, it is fairly easy, even necessary, to separate people into winners and losers in a power game. The next step is obvious and even inevitable: a prison for the losers.