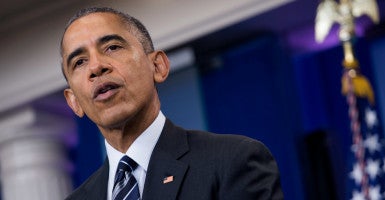 Budget chairmen in the House and Senate have chosen to dismiss President Obama’s new budget plan before seeing it, saying they would concentrate instead on reforming the process and reining in spending.

The White House released a preview of the president’s final budget Saturday.

“Nothing in the president’s prior budgets—none of which have ever balanced—has shown that the Obama administration has any real interest in actually solving our fiscal challenges or saving critical programs like Medicare and Social Security from insolvency,” Price said in a joint statement with Enzi, adding:

Rather than spend time on a proposal that, if anything like this administration’s previous budgets, will double down on the same failed policies that have led to the worst economic recovery in modern times, Congress should continue our work on building a budget that balances and that will foster a healthy economy.

In other words, Donovan, director of the Office of Management and Budget, will not get the traditional invite to testify on Obama’s budget plan, set to be unveiled Tuesday.

It appears the president’s final budget will continue to focus on new spending proposals instead of confronting our government’s massive overspending and debt. It is clear that this president will not put forth the budget effort that our times and our country require. Instead of hearing from an administration unconcerned with our $19 trillion in debt, we should focus on how to reform America’s broken budget process and restore the trust of hardworking taxpayers.

The White House was none too happy with the snub. Press secretary Josh Earnest said in a briefing Friday:

“It is a sad day for this institution when Congress snubs the president and the interests of working families with such an egregious abdication of our duty to the American people,” Rep. Chris Van Hollen of Maryland, the top Democrat on the House Budget Committee, said in a statement.

“Appalled” by Price’s decision, Van Hollen and all of the Democrats on the Budget Committee sent a letter Monday to the Georgia Republican urging him to rethink a decision they said went against “longstanding, bipartisan tradition.” They wrote:

You deem the president’s budget unworthy of review—sight unseen—because past administration budgets have rejected the tea party agenda.

Every year since 1975, the Budget Committee has held a hearing on the president’s budget with a high-level witness representing OMB. That hearing provides members of Congress their first opportunity to examine the breadth of the president’s request.

The White House announced Thursday, as part of the budget, a proposal to tax oil companies $10 per barrel of oil to help fund Obama’s “21st Century Clean Transportation System.”

House Speaker Paul Ryan, R-Wis., said the plan is “dead on arrival in Congress.” He said the tax would cost good-paying jobs and would raise the price of gas.

“Once again, the president expects hardworking consumers to pay for his out-of-touch climate agenda,” Ryan said in a prepared statement.

Rep. Bill Flores, R-Texas, chairman of the Republican Study Committee, echoed Ryan’s words in a statement on the oil tax.

“This proposed tax will do nothing more than raise costs on consumers, who are still struggling with stagnant wages,” Flores, who is leading the Republican Study Committee’s budget-writing efforts, said.

As Republicans look to agree upon a budget blueprint, the group of GOP lawmakers expects to reveal its own proposal later this month.