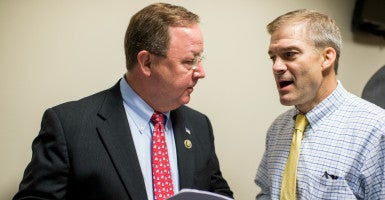 House Speaker Paul Ryan’s call for unity is facing a familiar challenge that tripped up Republican leaders before him: the budget and spending.

In October, in his effort to “clear the barn” for Ryan, then-Speaker John Boehner helped negotiate a two-year budget deal with President Barack Obama and Democrats. It raised the 2017 spending level roughly $30 billion above the total lawmakers set in 2011 to control spending.

Though the majority of Republicans did not vote for the Boehner-Obama budget deal, the new House leadership has indicated that spending bills for fiscal year 2017 must abide by the higher spending level prescribed by the October agreement.

But a new report from the nonpartisan Congressional Budget Office projecting trillion-dollar deficit levels by 2022 appears to be persuading more than just the usual suspects to ignore the budget deal and insist on a lower spending level.

“I can tell you that Obamacare and the spending crisis are the reasons why I came up here, and the reason I voted against the omnibus [spending bill] is because we got off Paul Ryan’s path to prosperity,” Rep. Blake Farenthold, R-Texas, said in an interview with The Daily Signal. “I will fight hard for a lower budget number, and I expect a great deal of my colleagues will do the same.”

Farenthold is referring to 2012 proposal authored by Ryan, R-Wis., when he was chairman of the House Budget Committee that reformed entitlement programs, cut taxes, and reduced spending.

While the conservative House Freedom Caucus is leading the charge to renege on the October budget deal and revert to the lower spending number set under the Budget Control Act of 2011, other GOP members also are concerned.

The Republican Study Committee, a larger group of conservative House members from which the Freedom Caucus sprang, will propose a budget that sticks to sequestration levels, its chairman says.

All conservatives care about fiscal responsibility. So I am inclined to come in at the BCA [Budget Control Act] numbers. I am the chair of a group that has 170-plus members, and each of those members will have to make their own determination. But I as a member would have trouble going to a higher number.

Flores said his committee’s budget, expected to be revealed at the end of the month, will contain higher defense spending at a level close to the October agreement but deeper cuts in non-defense spending to make up the difference.

The Republican Study Committee budget is meant to guide an eventual spending blueprint approved by the full House.

Once the Republican-controlled House adopts a budget, Ryan has said he wants to quickly begin the process of passing 12 individual spending bills that appropriate money for different government departments.

Those bills have to fulfill the spending levels set by the budget. So if Ryan and House Budget Chairman Tom Price, R-Ga., insist on doing a budget at the higher spending levels, the idea of returning to “regular order” and passing individual bills may not be enough to satisfy conservatives.

“We want regular order, we want appropriation bills, and we want reconciliation, but we have to show we are willing to cut spending and start at the [Budget Control Act] level at least,” said Rep. Marlin Stutzman, R-Ind., who is leading the Republican Study Committee’s budget-writing effort.

“It would be a huge signal to the country that Republicans will control spending,” Stutzman said. “This is an opportunity for Speaker Ryan to find a way to show a difference—that he is not going to operate the same way as Speaker Boehner and will be a different leader.”

On Tuesday night, Ryan met with Freedom Caucus members to discuss their concerns over the budget and plot a way forward.

Stutzman, who also belongs to the Freedom Caucus, commended Ryan for convening the meeting and told The Daily Signal that the parties had a “great conversation.”

But it’s clear a solution is far away. Despite the fact that Senate Democrats likely would block spending bills from being considered if they do not stick to the numbers from the October agreement, conservatives insist Ryan has options.

“There is a way out, and I hope Paul considers this way out,”  Rep. Mick Mulvaney, a Freedom Caucus leader, said Wednesday morning at the Conservative Policy Summit hosted by Heritage Action for America.

There is a way to break that cycle, which is to simply pass a budget off the floor now that is a good Republican budget. We know Mr. Boehner cut a deal at the spending levels we didn’t like and we didn’t vote for, but we are going to pass our budget. We are going to pass a budget that makes some sense, that’s more fiscally disciplined and has the policies we like, and that has a number we can rally behind and get a lot of Republicans to vote for.

Some Republicans believe that that effort is pointless. They believe that Mulvaney’s approach would inevitably lead to another all-in-one, last-ditch omnibus deal. And they say reverting to lower spending levels, and not following the law crafted in October, would hurt Republicans’ reputation.

“Frankly, it’s a little bit disingenuous for those who say on the one hand we need the regular order appropriations process, and then on the other hand we want to turn around and blow up the process right at the start by reneging on the law we just enacted,” Rep. Charlie Dent, R-Pa., said in an interview with The Daily Signal. Dent added:

If we were to renege on the topline funding level, then for all practical purposes, the House would be surrendering its power of purse authority to the Senate, because the Senate will mark its bill to the agreed-upon number set in law.

Other Republicans are sympathetic to Ryan’s belief that the House can achieve long-term savings through future entitlement reform, and that the appropriations process may not be the best place to address the deficit problem.

“I prefer to go back to the [lower] sequester numbers myself, but I understand why we did what we did,” Rep. Tom Rice, R-S.C., told The Daily Signal. “We are not going to solve our deficit problems with discretionary spending.”