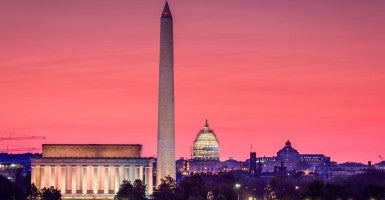 The federal government is broken, and congressional weakness is to blame.

Consent of the governed in a republic depends on transparent policymaking by representative institutions. Congress’ embrace of this mandate is part of what has made America successful and exceptional.

But if there is one thing politicians of every party and ideology agree on, it’s that hard work and accountability are inconvenient.

And so, over the course of the twentieth century, and accelerating in the twenty-first, Congress has handed many of its constitutional responsibilities to the Executive Branch.

Increasingly harmful federal laws are increasingly written by people who never stand for election, via processes contrary to those provided for in the Constitution and, indeed, with the explicit purpose of excluding the American people from their government and shielding policymakers from popular accountability.

Executive overreach is an enormous problem—but it’s a problem largely of Congress’ own making.

Executive overreach is an enormous problem—but it’s a problem largely of Congress’ own making.

Under Houses, Senates, presidents, and Supreme Courts of every partisan combination, Congress has recast itself as the backseat driver of American politics.

Today, the vast majority of federal “laws”—upwards of 95 percent—are not passed by the House and Senate and signed by the president; they are imposed unilaterally by unelected bureaucrats in the Executive Branch.

At the same time, Congress’ budget process has almost entirely broken down. Most federal spending has been put on auto-pilot, authorized without a vote. Meanwhile, fiscal oversight, deliberation, and reform are a bipartisan charade.

This upending of our constitutional order has led not only to bad policy, but to deep public distrust in our governing institutions.

Congress’ reclamation of its constitutional authority is a necessary first step toward real reform, within Washington and around the country.

So this week I joined a group of nine colleagues from the House and Senate to develop and promote a new agenda of structural reforms that will strengthen Congress and reassert its vital role in our society. We call it the Article 1 Project (A1P).

The purpose of the Project is to develop, advance, and ultimately enact an agenda of structural reforms to strengthen Congress by reclaiming its constitutional legislative powers that today are being improperly exercised by the Executive Branch.

Specifically, A1P will focus on restoring congressional power in four key areas at the core of Washington’s broken status quo:

With political attention now fixated on the presidential race, little hope for major legislative breakthroughs in President Obama’s final year in office, and the American people furious at Washington’s indifference and dysfunction, now is the perfect time for Congress to begin thinking about what a re-constitutionalized federal government would look like.

Such a government would not deliver either party or any citizen everything he wants. But it would give the American people a more representative and responsible government, and in turn, a healthier, freer society. All that stands between Americans and the government of, for, and by the people that the Founders bequeathed us is the will of the Congress to finally step up and do its job.