What School Choice Advocates Have to Celebrate 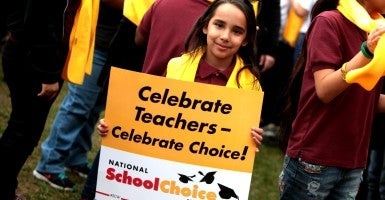 Over the past two decades, choice in education has seen dramatic gains. From the nation’s first school voucher program in Milwaukee, Wisc. in 1991 (although Vermont and Maine have had proto school choice options via “town tuitioning” programs since 1869 and 1873, respectively, allowing children to enroll in public or private schools outside of their neighborhood if there is no public school to attend) to the more than 56 private school choice options that operate in 28 states and Washington, D.C. today, school choice has been on the march.

Over the past decade alone, from 2004 to 2014, the number of children exercising private school choice has increased by over 257,000, more than tripling to over 350,000 total students. And in 2011, Arizona broke new ground by becoming the first state to offer education savings accounts (ESAs) to eligible families.

Education savings accounts enable families to have a proportion (90 percent in the case of Arizona) of the money that would have been spent on their child in their public school deposited instead into a parent-controlled savings account.

Families can then use those funds to pay for private school tuition, online learning, special education services and therapies, individual courses at their local public school or charter school, and private tutoring, among other things.

Families can even roll over unused funds from year to year, and can roll funds into a college savings account. Five states now have education savings accounts in place, including Nevada, which in 2015 became the first state to enact a near-universal option.

Creating school choice options in the states has been a welcome change for families. A growing body of empirical evidence suggests school choice can significantly improve academic attainment outcomes for participants, and can have positive impacts on academic achievement. School choice also confers positive benefits to the public school system, which responds to the competitive pressure placed on it by surrounding private schooling options.

In addition to the positive impacts on academic outcomes, Forster also found that 23 evaluations of the impact of school choice on public schools have been conducted to date, using a mix of methodologies.

Twenty-two of the 23 studies found that choice improved educational outcomes for students in the public schools that faced competition because of school choice policies, while one study was unable to detect any impact. In addition to the positive impacts of choice on educational outcomes and public school performance, researchers have conducted six empirical evaluations of the fiscal cost of school choice, all finding school choice creates savings for taxpayers.

As National School Choice Week kicks-off, here’s hoping 2016 will be the best year yet for choice in education. Several states are currently considering options such as tuition tax credit scholarships and education savings accounts, meaning its likely that by this time next year, thousands of additional families could be experiences the benefits of educational choice, enabling them to craft learning options that are as unique as their individual children.