Another Government-Caused Water Crisis and Cover-Up 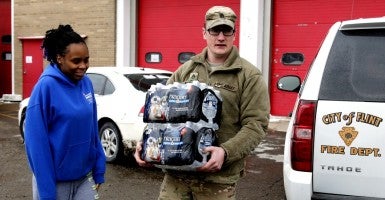 Flint, Mich., may be another case (similar to the Environmental Protection Agency Gold King Mine spill) of negligent government behavior that would raise criminal prosecution had it come from a private party.

Michigan officials are under scrutiny for potentially causing, and covering up, a series of decisions that resulted in Flint’s drinking water being contaminated with unsafe amounts of lead. Unsafe amounts of lead can cause behavioral problems and learning disabilities in children and kidney ailments in adults.

Flint officials’ 2014 decision to draw water from an inadequately treated Flint River source reportedly started the now widespread contamination of some of Flint’s 99,000 residents’ drinking water. The untreated water caused lead to leak from old pipes throughout the city.

So far the government has failed to remedy the situation. Four families with children suffering from elevated lead levels filed a federal lawsuit claiming that their children’s injuries were caused by officials’ negligence “in switching from Detroit’s water system to the Flint River.”

Michael Pitt, an attorney in the lawsuit, said “failure to stop the use of the Flint River, despite knowledge it was toxic, made the danger far worse.”

Michigan Gov. Rick Snyder formed the Flint Water Advisory Task Force to study the water crisis. The group wrote a report that concludes that “the state Department of Environmental Quality ‘must be held accountable for that failure.’”

Former prosecutor Keith Corbett said of any investigation into these behaviors that in “dealing with incompetence or malfeasance in office that’s just the result of people not doing their job, it becomes difficult to turn that into crime.” Still, some individuals “in positions of authority made bad decisions,” Corbett continued, “and those bad decisions have had horrible consequences for the city of Flint.”

Now federal investigators have their hands full looking for signs of criminal conduct from negligent discharge to mail fraud.

Whether criminal charges will be brought against government officials for contaminating Flint’s drinking water is unclear—just as it was when the EPA discharged toxic water into the Animas River.

There has to be a full discovery of what caused the contamination. With clear signs of serious contamination that include locals reporting health effects, however, it is likely that the government would bring a criminal prosecution had a private party caused the spill.

As Heritage scholars have said before: