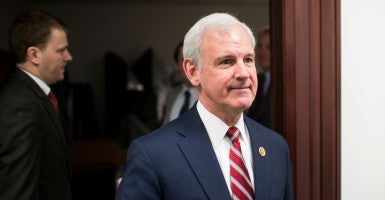 'When we talk about people who have been shot by mentally ill people, I understand it,' Rep. Bradley Byrne, R-Ala., told C-SPAN. (Photo: Bill Clark/CQ Roll Call/Newscom)

An Alabama congressman says his grandfather’s death at the hands of a mentally ill gunman shaped his views on the futility of stricter gun controls.

“I take every incident of gun violence seriously,”  Rep. Bradley Byrne, R-Ala., said Wednesday on C-SPAN. “What the president proposed yesterday will not affect this problem at all.”

On Tuesday, President Barack Obama announced executive actions, independent of Congress, that he said would reduce what he calls gun violence.

“This is not an abstract issue for me,” Byrne said, adding:

Byrne’s grandfather was shot by a mentally ill man in Mobile, Ala., before the Great Depression.

Washington Post reporter Amber Phillips wrote about Byrne’s personal story, noting the congressman had not talked much about this part of his family’s past “until he came to Congress and a number of shootings by mentally ill people dominated the news.”

After the murder, Byrne’s family did not turn to gun control as a solution, Phillips reported Wednesday:

Instead, Byrne said his family focused on the fact that there are people in Alabama and the United States who are mentally ill and precautions need to be taken to keep them and their families and their communities safe.

Byrne, a second-term congressman, is a co-sponsor of a bill introduced by Rep. Tim Murphy, R-Pa., that aims to overhaul the nation’s mental health care system.

“Every one of these mass shootings that we’ve seen in the last couple of years in America, the guns were purchased legally through a gun dealer who did background checks,” Byrne said in the C-SPAN interview, adding:

At some point, you’ve got to say,  ‘Now wait a minute, there’s the responsibility of the person that has the gun.’ … Don’t penalize the other 90-plus percent of people in America who buy guns legally and use them legally and don’t hurt anybody because we have a tiny percentage of people who have violated that.

>>> The Facts Behind 4 of Obama’s Claims on Guns