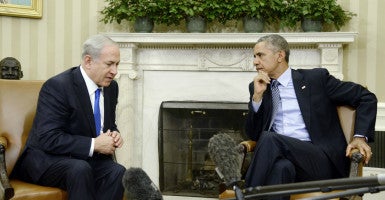 Republicans in Congress vowed to investigate the Obama administration after a report revealed that U.S. intelligence collection ensnared private conversations between lawmakers and top Israeli officials during negotiations on the Iran nuclear agreement.

The House Intelligence Committee opened a probe Wednesday into The Wall Street Journal report that the White House eavesdropped on Israeli Prime Minister Benjamin Netanyahu while he was lobbying against the Iran deal.

“It’s important for Congress to investigate exactly what took place, who within the Obama administration knew about these activities taking place, when they knew and what they did or didn’t do about it,” Rep. Lee Zeldin, R-N.Y., told The Daily Signal.

Zeldin, the sole Jewish Republican in Congress, worked adamantly against the Iran accord while negotiations were ongoing, meeting with Netanyahu and top officials in the Israeli government to discuss its “troubling components.”

While he would not comment on whether he believed that the National Security Agency had spied on his meetings, Zeldin said the Obama administration violated federal laws if the Journal report is true.

“The Department of Justice should be investigating this as well, because it is highly inappropriate behavior that appears to serve more of a political benefit than anything else,” Zeldin said.

U.S. officials told The Wall Street Journal that President Barack Obama claimed that keeping tabs on Netanyahu served a “compelling national security purpose” despite promising two years ago he would curb surveillance on the leaders of U.S. allies.

White House officials thought the netted information could help counter Netanyahu’s lobbying against the Iran deal, the Journal reported. To avoid a formal request for eavesdropping, officials said the Obama administration authorized the NSA to decide what it would and would not share.

The NSA’s tracking of Netanyahu and Israeli leaders also captured conversations between U.S. lawmakers, sparking distress among officials that the Obama administration would be accused of spying on Congress.

James Carafano, vice president of The Heritage Foundation’s foreign and defense policy studies, said the revelations would be hard to prove illegal, because the broad implications of the Presidential Policy Directive 28 allow Obama to assert that the spying was used for national security purposes.

“But clearly, from a practical standpoint, this was by all apparent means about collecting political intelligence and that seems to me to be an inordinate abuse of power,” Carafano said.

He said the administration will simply play “rope a dope” to run out the clock on Obama’s time in office, making a congressional probe difficult. Carafano noted that because the NSA is separate from the White House, lawmakers have the authority and obligation to call closed-door sessions.

National Security Council spokesman Ned Price would not comment on specific allegations in the Journal report, but he said in a statement Wednesday:

We do not conduct any foreign intelligence surveillance activities unless there is a specific and validated national security purpose. This applies to ordinary citizens and world leaders alike.

Zeldin said it seems that Obama has often “gone out of his way to create more daylight between himself” and Netanyahu and that the Journal’s revelations harm U.S.-Israeli relations.