Why Sexual Orientation Laws Are a Threat to Local Education 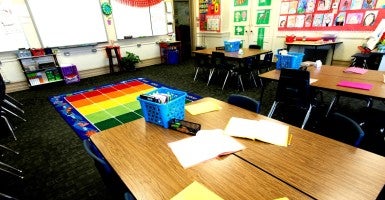 Taylor LaJoie is a member of the Young Leaders Program at The Heritage Foundation.

Since the Department of Education was founded in 1979, the federal government has been increasingly involved in public education.

The newest encroachment by the federal government into education comes with the arrival of Sexual Orientation and Gender Identity (SOGI) laws.

The Department of Education has unilaterally decided that “sex” in Title IX (a federal law that forbids discrimination on the basis of sex) now includes “gender identity” and is imposing these policies on local schools that receive federal funds.

The problem is that SGOI laws, which are being pushed by LGBT (lesbian, gay, bisexual, and transgender) activists, represent a serious danger to local school communities.

Ryan Anderson, a researcher at The Heritage Foundation, explained in a recent report that SOGI laws “threaten Americans with liability for alleged ‘discrimination’ based on subjective identities, not objective traits.”

[W]hile issues of sex and gender identity are psychologically, morally, and politically controversial, all should agree that children should be protected from having to sort through such questions before they reach an appropriate age as determined by their parents. SOGI laws would prevent schools, parents, and employers from protecting children from these adult debates about sex and gender identity by forcing employers, including schools, to yield to the desires of transgender employees in ways that put them in the spotlight.

Following the Obergefell v. Hodges decision at the Supreme Court in June of 2015, political pressure has not ceased with the inclusion of same-sex couples to marital status across all fifty states. Moving beyond marriage, LGBT activist groups such as the Human Rights Campaign (HRC) have launched new initiatives like the “Beyond Marriage Equality Initiative” with the “Equality Act” as the legislative effort to add “sexual orientation” and “gender identity” to existing civil rights law.

Even though the “Equality Act” (a SOGI law) has yet to be passed, local school boards are being held liable if they do not comply with the re-interpretation of the 1972 Civil Rights Act, specifically Title IX.

Anderson explains, “In April 2014, the U.S. Education Department’s Office for Civil Rights released updated guidelines to the 1972 Title IX civil rights law highlighting that the nondiscrimination clause ‘extends to claims of discrimination based on gender identity or failure to conform to stereotypical notions of masculinity or femininity.’ Because a federal agency unilaterally reinterpreted a 1972 law, local school boards were coming under fire. Indeed, the Post reports that ‘where schools are found to have failed to comply with Title IX, the Education Department may terminate federal funding.’”

For better or worse, local school districts are held hostage by the Department of Education and its federal funding if they do not comply with the increasingly overbearing political demands of the Obama administration.

For the Obama administration, a student who is questioning his/her gender identity ought to take priority over the objections that other students might have to undressing (or seeing someone undress) in front of students of the opposite sex.

For instance, the Department of Education recently ordered a suburban Chicago school to allow a biologically male student (now identifying as a female) unrestricted access to the girls’ locker rooms and shower facilities.

The implications of this decision are far-reaching and produce a plethora of consequences. School administrators and educators are now placed in a position where their funding and their ability to oversee those in their charge are increasingly subjected to the political goals of liberal progressive activist groups like the Human Rights Campaign.

The decision by the Department of Education shows that the Obama administration plans to make a precedent of accommodating the goals of the transgender movement regardless of the impacts in may have on local school districts or young students.

This will create many negative consequences on private educational institutions, many of which have religious affiliation and, at the present time, enjoy a non-profit tax status from the federal government. This status may soon be in jeopardy.

The non-profit tax issue was discussed in April when oral argument was heard for Obergefell v. Hodges. Anderson has laid out why this is a real concern:

In the oral arguments before the Supreme Court in Obergefell (the case redefining marriage), Justice Samuel Alito asked Solicitor General Donald Verrilli whether a university or college might lose its nonprofit tax status because of its conviction that marriage is the union of husband and wife. Verrilli’s response was chilling: ‘It’s certainly going to be an issue. I—I don’t deny that. I don’t deny that, Justice Alito. It is—it is going to be an issue.’

This is no longer a distant possibility, but a present reality that private institutions must prepare for. As Nathan Swanson argues at Public Discourse, “Obergefell may force private schools to decide between holding fast to their beliefs and maintaining their eligibility for school choice programs. Schools may be forced to close to avoid government scrutiny and interference in their faith.”

Congress has yet to pass any bill remotely close to the “Equality Act,” but it seems that schools are already being forced to comply with the will of the Department of Education. The conclusion seems clear: Comply with the new standard or lose funding.

These decisions show a clear overreach of authority by the Obama administration. The federal government is deliberately forcing a political agenda onto parents, teachers, and students. Rather than focusing on giving parents more choices with where and how to educate their children, the Department of Education is in effect punishing schools if they do not follow a liberal political agenda.