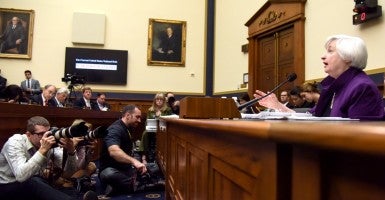 For the first time in seven years, the Federal Reserve has raised its target for the federal funds rate. Some news reports get this story right, but most repeat the standard line that the Fed has raised interest rates.

This is wrong. The Fed does not set interest rates, and it’s more than just semantics.

The Fed does not set interest rates, and it’s more than just semantics.

Inside the Beltway, many policymakers mistakenly believe that the Fed makes interest rates whatever it wants them to be. They incorrectly believe that our central bank precisely controls the cost of government borrowing as well as the cost of private credit.

They’re giving the Fed much too much credit. The global marketplace in which we live provides so many investment alternatives that it’s doubtful any government agency could have such power.

>>> Norbert Michel on What It Means for the Economy

The misplaced focus on the Fed’s responsibility for interest rates obscures the debate over major policy reforms that could improve the nation’s monetary system. A truly competitive monetary system would tend to stabilize national income, avoiding major changes in the price level caused by monetary disturbances.

None of this is to say the Fed doesn’t impact interest rates or, more broadly, credit markets. But they simply don’t have the precise control so many people seem to assume.

The first problem with the conventional headline, that the Fed sets interest rates, is that it’s too broad. Interest rates are attached to literally thousands of investments.

The evidence doesn’t support anything close, and monetary economists, such as former Federal Reserve Chairman Ben Bernanke, widely acknowledge that underlying economic conditions are the real determinants for interest rates.

Interest rates reflect what people expect to earn on investments, and if they don’t expect higher future profits, rates will not go up much—no matter what the Fed does.

But what about the federal funds rate, which is the key market rate the Fed targets? It doesn’t set that rate either, even though it (typically) has a great deal of influence on it.

The federal funds rate is the interest rate banks charge each other to borrow reserves, and banks negotiate their own terms on these overnight loans. Historically, there’s a great deal of dispersion in the rates banks charge for these loans.

The Fed actually targets an average of these rates, and that average rate (the effective federal funds rate) is not always equal to the Fed’s target.

There’s no doubt the Fed has influence over the average federal funds rate, because only the Fed can change the total quantity of reserves in the banking system.

But it’s pretty hard to argue that the Fed sets interest rates in the broader economy when it doesn’t even set the federal funds rate. Besides, evidence shows the Fed tends to change its target rate in response to changes in market rates—not the other way around. Either way, the Fed’s rate target is only part of the story. The Fed regulates the amount of money flowing through the economy, and their actions impact the economy regardless of whether interest rates are historically high or low.

That’s why policymakers should be focused on the best way to prevent monetary policy from disrupting the economy.

The Fed can help overheat the economy or throw it into a nosedive regardless of rates being historically high or low. The 2008 crisis provides an excellent case study.

During the crisis, the Fed departed from pure monetary policy—i.e., providing liquidity to the entire banking system—and engaged in direct lending to financially troubled firms.

These so-called emergency loans amounted to federal bailouts. And because they rescued firms from the consequences of their bad decisions, the loans are likely to encourage more bad loans in the future.

And the Fed has a long history of making direct loans to failing firms, so it has likely contributed to a greater than optimal level of lending in the economy for years. At the very least, Fed emergency lending distorts markets prices, including interest rates.

Separately, the Fed seems to have kept its monetary stance too tight in 2008, likely exacerbating the recession.

All of these problems—bailing out failing firms as well as overly loose or tight monetary policy—can occur regardless of the interest rate level.