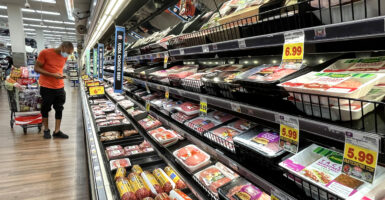 A shopper checks the prices of meat in a Los Angeles supermarket on Nov. 11. Consumer prices have increased on items such as food, cars, and other goods as the inflation rate has risen to a level not seen in 30 years. (Photo: Mario Tama/ Getty Images)

Higher prices on everything from groceries to automobiles are increasingly common across the United States. It’s a phenomenon that’s becoming impossible to ignore.

That’s what Sen. Mark Warner, D-Va., said in a recording of a Wednesday night teleconference obtained by The Daily Signal. He also said that the higher prices are the result of a supply chain breakdown.

Inflation is increasing, Warner said, in no small part also because of Federal Reserve policies.

In July, President Joe Biden said high inflation would be “temporary” and that it’s the result of the COVID-19 shutdowns.

“When you completely shut down the economy the way we did with COVID, a whole lot of companies stopped making stuff because they were not sure when the economy would reopen,” Warner told residents of Fairfax and Prince William counties in Northern Virginia in a “tele-town hall.”

That caused the price of many related goods to increase, in addition to the price of food, the Virginia senator explained.

“I know, for example, I’ve been focusing a lot on semiconductor chips … . It doesn’t directly show up in the grocery store, at the gas pump, but it does if you are going to buy a car,” he said. “We have auto factories shut down because they can’t get semiconductor chips.”

Because of this supply chain breakdown, we’re now seeing many seemingly unrelated goods going up in price at the same time.

We saw huge increases in the price of lumber in the spring because … what’s called the supply chain had shut down. We’re so involved in global trade.

I think we are way too dependent on manufacturing coming from China, but just to give you an example, a lot of our products—not food, again—clothing and electronics and other goods.

The costs aren’t just affecting manufacturing and shipping companies. They are getting “passed along” to consumers, he said. Warner noted that the supply chain problem is a global one, and that in Europe, things are generally much worse.

Though the situation is bad, Warner said he has reason for optimism that the supply chain will be restored.

“The good news is, as companies start ratcheting back up their production, and some of these ships that were caught, frankly, in poor companies, where they didn’t get any product to bring back, you’re going to see some of those costs decrease,” Warner said, referring to the cost-ineffectiveness of ships returning to where they came from empty. “We’ve already seen that.”

Though he said the long-term outlook is improving, Warner warned that Americans should not think that means things won’t be bad for the winter holidays. The supply chain issues and inflation will continue to be a problem, no matter what Congress does.

The third-term Virginia lawmaker said we are really in “uncharted territory” economically, insofar as we’ve never in modern times had to reboot an economy after a total shutdown, not even after World War II.

He did suggest a partial solution to the rapidly increasing rate of inflation. The Federal Reserve, the U.S. central banking authority, has been buying Treasury bonds in a process called “quantitative easing.” That’s done to keep interest rates low.

Warner said if the Federal Reserve cuts back on quantitative easing, it would push up interest rates, but slow down the increase in inflation.

“Short-term, like the next 60 to 90 days, if the Federal Reserve would stop some of their what’s called ‘quantitative easing’ and stop buying as many bonds, that would help send a signal to the market [that] I think would start a slowdown of some of this inflation,” the Virginia lawmaker said.

The bottom line, Warner said, is that the inflation everyone is seeing is a serious issue.

“It is real, and it is not just in this country,” he said.