Why Isn’t There More Talk About Out-of-Control Spending With the Government Funding Deadline So Close? 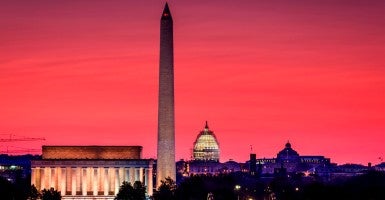 "Congress is once again on a slippery slope to higher deficits and more debt." (Photo: iStockphoto)

With a Dec. 11 government funding lapse looming, lawmakers have every opportunity to rein in reckless spending increases (and they should). But few are taking a stance to protect taxpayers from higher spending.

This is puzzling because the Obama-Boehner budget deal (Bipartisan Budget Act, or BBA), which was signed into law on Nov. 2, established only a new ceiling for discretionary spending, rather than a spending goal.

If Congress appropriates funding all the way to the new ceiling, it will also set up incentives for lawmakers to break the spending caps once again in 2017 and 2018—repeating the same cycle of higher spending.

This means Congress is once again on a slippery slope to higher deficits and more debt. Not once has Congress stayed below the caps. Every year Congress has nourished its spending addiction by lifting the caps. From canceling sequestration cuts in 2013 that led to an additional $35 billion in spending to forging the Ryan-Murray budget deal and now the Obama-Boehner BBA, bipartisanship in Washington means spending more today and sticking taxpayers with the bill in the future.

If Congress appropriates every single penny authorized by the Obama-Boehner budget deal, fiscal year 2017 budget authority would be above the current cap for fiscal year 2018. If Congress can’t live with spending caps that grow each year, how much faith can we put in lawmakers being able to cut spending from one year to the next?

It’s clear that the Bipartisan Budget Act sets us up for yet more deficit spending in the future. With the debt limit gone and mandatory spending on entitlement programs out of control, Congress is slowly but surely dismantling the last remnant of fiscal discipline as embodied by the Budget Control Act spending caps.

It does not have to be this way. From canceling tens of billions in duplicative spending to eliminating corporate subsidies, lawmakers can live up to their commitment to restrain spending. Where there is a will, there is a way. Now is the time to take a stance against the higher spending levels and single out bad government programs for cuts.