Trump’s Budget Weighs In at $4.8 Trillion, Projects Deficits Until 2035 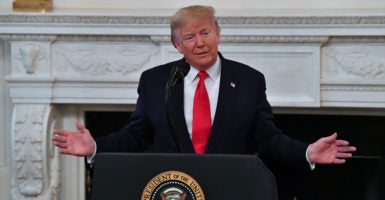 President Donald Trump delivers remarks Monday on his budget proposal and other topics at a gathering at the White House of the nation's governors. (Photo: Nicholas Kama/AFP/Getty Images)

The Trump administration on Monday presented a $4.8 trillion spending proposal for fiscal 2021 to Congress that would balance the federal budget in 15 years, cut foreign aid, and boost the nuclear arsenal.

“The plan offered today proposes to balance the budget within 15 years by proposing more deficit reduction, $4.6 trillion, more than any president in history,” Russ Vought, acting director of the Office of Management and Budget, told reporters.

Still, House Speaker Nancy Pelosi, D-Calif., was sharply critical of the president’s spending blueprint, contending that it would be “devastating” to “millions of Americans.”

The first three budgets have not moved in our direction. But deficits continue to be very high. The debt as a percentage of GDP [gross domestic product] is something that hopefully becomes a bipartisan consensus that we will tackle. We are going to keep proposing these types of budgets, and hope at some point, Congress will have some sense of fiscal sanity and join us in trying to tackle our debt and deficit.

But, the president said, the budget proposal is going after “tremendous waste and tremendous fraud.”

Still, Vought said there would be $2 trillion in savings in the programs by reducing the cost of care and prescription drug costs.

The budget proposal would increase spending by $2 billion for the southern border wall and hike military spending by just 0.3%, to $740 billion. That includes $29 billion more for nuclear weapons.

Updating the nuclear arsenal is something the United States does about every three decades, Vought said, adding this was one of the president’s top priorities.

When speaking to the governors, Trump also said: “We were taken advantage of by a lot of countries, by a lot of allies.”

He said because of pressure from his administration, more European countries are contributing their share to the NATO alliance.

The president’s budget proposal would cut foreign aid by 21%.

“We are still going to be spending about $40 billion on foreign aid. So, it’s a substantial amount. We are still going to be at a very high level, compared to the rest of the world in terms of what we provide,” Vought said. “Humanitarian assistance … under this budget would carry over to be the second-highest the U.S. has ever provided to the world. So, there is a substantial amount of foreign aid, even at a 21% cut in the program.”

He added that there’s plenty of waste in foreign aid:

We need to move beyond the reality of spending money for the Bob Dylan statue in Mozambique, or the NASA space camp in Pakistan, or the professional cricket league in Afghanistan. We have to make choices when we have the level of deficits now we are experiencing.

The proposal would cut the Environmental Protection Agency budget by 26% and the Department of Housing and Urban Development by 15%.

The budget blueprint also calls for work requirements for recipients of food stamps.

“This president believes in getting people who are in a cycle of dependency off of welfare, onto the ladder of economic opportunity,” the OMB chief said. “There is a host of proposals along those lines. That leads to labor force participation, and it’s something we are very excited about.”

Vought said a $1 trillion infrastructure proposal would be paid for through $800 billion in the federal highway program and $200 billion from savings in other areas.

“The budget is a statement of values, and once again the president is showing just how little he values the good health, financial security, and well-being of hardworking American families,” Pelosi said in a written statement. “Year after year, President Trump’s budgets have sought to inflict devastating cuts to critical lifelines that millions of Americans rely on.”

“Presidents’ budgets are a reflection of administration priorities, but in the end, they are just a list of suggestions, as the power of the purse rests with Congress,” Enzi said. “Bipartisan consensus will be necessary to bring our debt and deficits under control.  I hope to work with my colleagues on both sides of the aisle to put our country on a more sustainable fiscal course.”

Romina Boccia, director of the Grover M. Hermann Center for the Federal Budget at The Heritage Foundation, called the president’s proposal a good first step toward deficit reduction.

“At a time when the government is running trillion-dollar deficits while the economy is growing, the president offers Congress a path to balance the federal budget in 15 years,” she said in a written statement, adding:

President Trump’s budget reduces debt as a percentage of the economy while continuing to keep taxes low, improves health care choices, continues to invest in the armed forces and national security, and takes important steps towards meaningfully reducing the growth in mandatory spending.

However, Boccia said, the proposal also has “missed opportunities.”

“The administration must stay the course and not fall prey to using the budget as a vehicle for problematic policy initiatives, including misguided infrastructure funding from Washington and a federal encroachment in education policy,” she said.