House Democrats Pursue a Reckless Spending Deal, Not a Budget 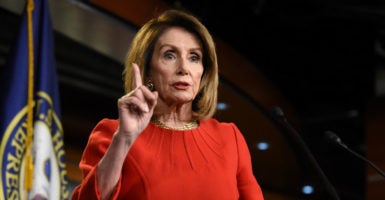 Democrats are trying to put the last nail in the coffin of the Budget Control Act of 2011, one of the few remaining semblances of fiscal restraint left in Washington.

This week, the House likely will vote on a plan to raise the law’s discretionary spending caps by at least $357 billion for 2020-2021. As has far too often become the case in Congress, none of the proposed new funding will be paid for with cuts to other programs.

The country is over $22 trillion in debt. It is past time for Congress to get serious about spending reforms and prioritizing precious taxpayer dollars.

Democrats’ plan to raise the caps imposed by the Budget Control Act is the latest in a series of attempts to divert more money to programs and activities that the federal government shouldn’t be involved in. In the process, it would burden Americans with even more deficit spending.

The latest deal would raise total base discretionary spending by $357 billion over two years. Of the new funding, $178 billion would go toward national defense while the other $179 billion would be reserved for domestic programs.

On top of the additional base funding, the bill would allow for $77 billion in Overseas Contingency Operations funding in 2020, $1.15 billion for additional IRS tax enforcement efforts through 2021, and $7.5 billion to carry out the 2020 census.

All of this spending would add to the deficit.

Funding for overseas contingency operations may be needed in 2020 to ensure our military is properly equipped. However, the designation has been far too often abused to fill gaps in the Defense Department and State Department budgets. Congress should begin phasing this funding and reserve it only for times of true emergencies and unforeseen events.

The other proposed adjustments to the caps in the Budget Control Act are more problematic and set a dangerous precedent. These are recurring expenses.

Congress has had 10 years to prepare for the census. It’s unfair to taxpayers for Congress to add $7.5 billion to the deficit just because lawmakers chose not to plan ahead.

That’s one of the major problems with the ongoing cycle of two-year budget deals. No planning or foresight goes into them; rather, Congress forces federal agencies to live from one crisis to the next.

Also troubling is the fact that House Democrats are trying to portray this irresponsible spending plan as a “budget.”

An actual budget resolution sets out levels of spending, revenues, deficits, and debt to which the federal government is supposed to adhere. These may cover an indefinite period of time, as long as the resolution projects out at least five years.

Budget resolutions do not become law, but the levels laid out by a resolution may be enforced by Congress through budgetary points of order. However, budgets unlock the process known as reconciliation, which can result in legislation that becomes law and is a key tool available to Congress to make major reforms happen.

To be clear, a bill to raise discretionary spending limits is in no way, shape, or form a budget resolution.

Congress has a statutory duty to produce a budget resolution before April 15 of each year. The Senate Budget Committee at least tried to do its part by approving a five-year budget plan. The House is not making a legitimate attempt at developing a budget, a clear dereliction of its duty.

The lack of a fiscal year 2020 budget in the House shows why reforms such as the No Budget, No Pay Act are needed. Unless persuaded to do their jobs, some lawmakers are content to do the minimum and avoid making sometimes difficult funding choices.

The House should go back to the drawing board and work with the Senate to develop a real budget plan that includes reconciliation instructions that will reduce spending and put deficit and debt levels on a downward path.

Raising the spending caps lets lawmakers off the hook from budgeting. If every part of the federal government gets a raise, lawmakers don’t have to prioritize spending.

Unfortunately, taxpayers and future generations who will be burdened by more debt are the real losers.