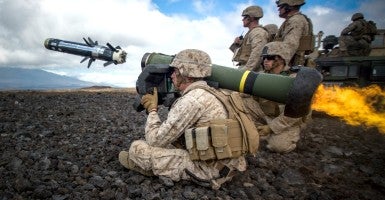 "Nearly a year and a half after the U.S. first began conducting air strikes in Iraq, ISIS has not been contained." (Photo: U.S. Marine Corps photo by Cpl. Ricky S. Gomez/Released)

Last week, Defense Secretary Ash Carter announced that the U.S. will send between 100 and 150 special operations forces to Iraq to conduct targeted ground raids against ISIS targets in Iraq and Syria.

The announcement follows closely on the heels of President Obama’s October decision to send approximately 50 special operations forces to Syria. While these forces will reportedly be authorized to conduct raids in Syria and target and capture ISIS members, the administration’s insistence that “these forces not have a combat mission” suggests that the U.S. approach to fighting ISIS has not changed. The limited number of these forces and the limitations placed on their mission do not equate to a strategy from the White House—they are simply a timid and incremental expansion of U.S. involvement that is not expected to turn the tide of the war.

While special operations forces can be used to great effect in “empowering host nation forces, providing appropriate assistance to humanitarian agencies, and engaging key populations,” the concern is that these strengths are being wielded in the absence of a broader strategy.

Nearly a year and a half after the U.S. first began conducting air strikes in Iraq, ISIS has not been contained. The introduction of ground forces appears to be just a knee-jerk reaction to current events.

Yet the administration continues to justify the incremental response to growing threats and stagnating progress by arguing that a more expansive effort wouldn’t produce a better result. In a press conference following the November Paris attacks, Obama argued:

We can retake territory and, as long as we keep our troops there we can hold it, but that does not solve the underlying problem of eliminating the dynamics that are producing these kinds of violent, extremist groups.

A military defeat of ISIS alone certainly will not restore stability to the Middle East, but there are many options between an Iraq-style invasion and a laissez-faire level of involvement. Leaving it to the locals is not a strategy. While ISIS may call Syria home base, its fight is global, and its reach is growing.

In order to protect the homeland, Obama needs to pitch in to the fight abroad.