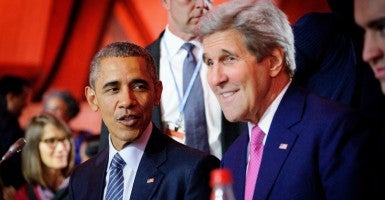 President Barack Obama last week tried to give us a history lesson on climate change. “As human beings are placed under strain, then bad things happen,” he said. “And, you know, if you look at world history, whenever people are desperate, when people start lacking food, when people are not able to make a living or take care of their families, that’s when ideologies arise that are dangerous.”

Welcome to leaps in logic that would span the Grand Canyon. Apparently excruciatingly slow, contradictory, and sometimes nearly imperceptible changes in the atmosphere’s temperature are capable of spawning ideologies like communism, fascism, and now Islamic jihadism, although the president won’t use that term. Never mind all those historical details about what actually caused these ideologies to rise—social upheavals like industrialization, philosophical disputes unleashed by the Enlightenment, and the crises inside Islam. The president has got it figured out. Never to be left out in doubling down on a bad idea, the president’s national security adviser, Susan Rice, jumped into the fray. She blames the Syrian civil war on climate change.

This would come as a great surprise to protesters who in March 2011 found themselves fired upon by Assad’s security forces. They were not the slightest bit interested in the drought that Rice and others argue caused the war.

Protesters were asking not for water, but for democracy, and as any college sophomore would know, the unrest that gave rise to the conflict was caused not by dry weather, but by Assad’s oppression.

If you don’t believe me, take it from the co-author of the report that spawned the “climate change did it” theory of the Syrian war, Richard Seager. After arguing that global warming made the offending Syrian drought worse, he quickly adds, “We’re not saying the drought caused the [Syrian] war.”

Indeed it didn’t, because that would be preposterous.

And yet that is precisely what Rice would want you to believe. Seager may cover himself with a categorical denial after the fact, but he, Rice, and others like them know that their supporters will pick up their true meaning.

Such leaps in logic have a name. It is called sophistry.

Vague statements about what the “science” supposedly means hang out there as mere suggestions, to be denied or embraced depending on how useful they are to the political agenda. That’s the literal meaning of sophistry: the use of subtly deceptive argumentation to make a falsehood sound true—otherwise, and crudely, known as a lie.

Can there be any question as to why so many people are so skeptical of claims made by climate change advocates? Instead of a cautious scientific method, we get alarmism and wild speculations that cannot be supported by the facts.

I suggest that the president take some courses in history and logic. Somehow he must have missed them at Columbia. If he doesn’t want to do that, then perhaps he can at least spare us the inane world history lessons.