What Obama Has Wrong on Climate Change 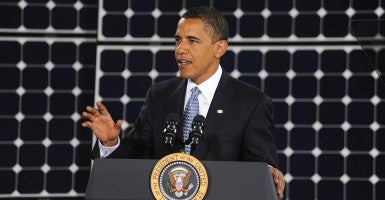 President Barack Obama again sought to make the case to the American people for “dealing with the rapidly growing threat of climate change” last month, in a speech to the League of Conservation Voters. Right up front he said that his speech would not have “a lot of spin, just the facts.” When a politician says that, you know to expect the opposite.

Obama assured the audience that members of Congress “accept that man-made climate change is real” but are afraid to “say so out loud” out of fear that they “will be run out of town by a bunch of fringe elements.” Thus, in a few words, Obama accused Congress of being cowards, liars, and ignorant of the fact that “seven in ten Americans say global warming is a serious problem [and] say the federal government should limit pollution from our power plants.”

There may be members of Congress who deny that large increases in greenhouse gases can affect the climate, but, if they exist, they are a small minority. Most skeptics of the president’s climate agenda have other, very sound reasons for their opposition.

First, the exact extent to which man-made carbon dioxide emissions, which are only a small portion of total emissions, affect the climate is uncertain. Advocates have damaged their credibility significantly by making extreme predictions of rapidly accelerating warming and more frequent, more intense natural disasters — predictions that have not been supported by real-world experience:

The real-world temperature changes have fallen far short of those projected by climate models used by the United Nations that are the basis for calls to action such as President Obama’s Climate Action Plan. Specifically, as stated by Roy Spencer, the principle research scientist at the University of Alabama: “The magnitude of global-average atmospheric warming between 1979 and 2012 is only about 50 percent that predicted by the climate models relied upon by the IPCC in their projections of global warming.” Those models also fail to explain why there has been a “pause” in warming since the late 1990s.

As observed by Roger Pielke Jr., a scientist who testified before Congress last July: “It is misleading, and just plain incorrect, to claim that disasters associated with hurricanes, tornadoes, floods, or droughts have increased on climate timescales either in the United States or globally.”

The U.N. Environment Program falsely predicted in 2005 that climate change would lead to 50 million refugees by 2010.

In addition, errors such as U.N. claims that Himalayan glaciers could melt by 2035 and indications that scientists have manipulated data raise concerns of bias.

Second, the cost of implementing meaningful constraints on greenhouse-gas emissions (GHGs) would be enormous. Despite a recent and important Supreme Court victory for the separation of powers — a decision preventing the EPA from regulating GHGs from millions of small entities — the EPA is moving forward with its regulatory equivalent of cap-and-trade legislation. A recent Heritage Foundation analysis of the administration’s war on coal projects that the onslaught of regulations would cost America 600,000 jobs and more than $1,200 per year in income for a family of four.

Unless and until this issue is resolved, the U.S. would be foolish to consider unilateral restrictions on the U.S. economy that, in the end, would be merely symbolic without having significant effect on global emissions reductions. And even in some imaginary world where we could accomplish international cooperation, the economic and climate realities indicate that this is still a losing strategy.

In short, Congress has justifiable reasons to question the president’s call for unilateral U.S. action on climate change.

Moreover, contrary to the president’s claims, polls indicate that people tend to agree with Congress that climate change is not a high priority.

A Pew Research poll from January 2014 found: “The American public routinely ranks dealing with global warming low on its list of priorities for the president and Congress. This year, it ranked second to last among 20 issues tested.”

A March 2014 Gallup poll revealed: “Only 24 percent of Americans say they worry about [climate change] a great deal. This puts climate change, along with the quality of the environment, near the bottom of a list of 15 issues Americans rated in Gallup’s March 6–9 survey.”

Americans often have a reputation for being out of step with the rest of the world, but on climate change they are in the global mainstream, according to the United Nations’ “My World” survey. As of June 26, 2014, there had been more than 2.36 million votes submitted to the survey from nearly every country and territory around the world. Individuals are presented with 16 issues and asked to select the six that “are most important for you and your family.” Dead last among the choices was “action taken on climate change.”

All of this goes to show that it is not Congress that is out of step with the American public or even global opinion, but President Obama and the global elites who are leading the charge on climate change.