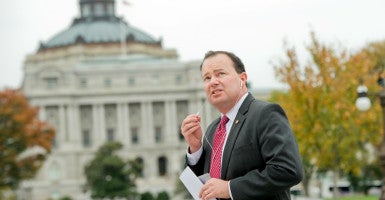 Sen. Mike Lee, R-Utah, believes the Obama administration should seek Senate approval for an international climate change agreement that could be agreed upon next month. (Photo: Tom Williams/CQ Roll Call)

Sen. Mike Lee warned the Obama administration on Wednesday that it should reconsider its plan to not submit for congressional approval an international climate change agreement that could be signed later next month.

To avoid the inevitable objection of congressional Republicans, the Obama administration has indicated it plans to work-around the constitutional requirement that a president only enter into a legally binding treaty if it’s approved by two-thirds of the Senate.

“The Obama administration’s plan is not just ambitious,” said Lee, R-Utah, during a speech at The Heritage Foundation. “It’s also deeply cynical – because, at its core, the plan is an attempt to enshrine in an international agreement President Obama’s unilateral environmental regulatory regime, which remains deeply unpopular among the American people.”

According to news reports and reinforced by comments from the White House, the Obama administration plans to sidestep the treaty requirement by negotiating the agreement in a way to where it is not legally binding.

“I think it’s hard to take seriously from some members of Congress who deny the fact that climate change exists that they should have some opportunity to render judgement about a climate change agreement,” said Josh Earnest, the White House press secretary, in May.

Under the plan, reported by the New York Times, countries would be legally mandated to implement climate change policies, and possibly agree to a timetable to do so. But the countries would only voluntarily commit to specific amounts of emissions reductions.

The Obama administration would argue that the broad pledges by countries to address climate change by reducing emissions — without committing to specific levels — is already legally protected under an existing 1992 treaty.

The 1992 treaty, called the United Nations Framework Convention on Climate Change, was signed by President George H.W. Bush and ratified by the Senate. It’s objective is to “stabilize” greenhouse gas emissions, but it does not set emissions limits or timetables on individual countries.

Critics of Obama’s plan, including Steven Groves, an expert on treaties at The Heritage Foundation, argue that Bush and the then-Democratically controlled Senate committed to the 1992 treaty with the understanding that future agreements containing timetables and/or targets would be submitted to Congress.

“The theory is that, so long as the emission-reduction targets are only politically binding, the president would be under no obligation to submit them to the Senate,” Lee said in his speech.

“The hybrid-agreement theory is clever, to be sure. But it flatly contradicts the understanding of the Framework Convention that has been universally accepted since its ratification in 1992. Targets and timetables of any legal character have always been understood to require the Senate’s advice and consent.”

By seeking to go around Congress on his international climate change plans, Obama is following a strategy that he’s pursued domestically.

The rule compels states to create their own plans for reducing carbon emissions. Worried that the rule could harm the coal industry and increase energy prices, Senate Majority Leader Mitch McConnell, R-Ky., has asked governors to refuse to comply. Last month, two dozen states joined a suit against the rules that could end up before the Supreme Court.

“For nearly seven years President Obama has failed to secure approval of his energy regulatory agenda at home,” Lee said.

“And now, with just one year left in office, he’s hoping an endorsement from U.N. bureaucrats will give his regulations – and the unprecedented expansion of executive power they represent – the credibility and sanction he was unable to secure through the democratic process.”

Even if Obama’s domestic climate policies are found legally sound, the administration knows that a significant cut to the world’s carbon emissions can only occur if other large emitters, like China and India, agree to enact similar cuts.

Additionally, many of the world’s poorer countries will depend on billions of dollars in funding from richer countries to combat climate change.

Lee suggested that to deter Obama from working outside Congress, lawmakers from both chambers should threaten to use the “power of the purse” to “not send a dime of taxpayer money to the implementation of any agreement” not brought before the Senate, including funds expected to go to developing countries.

Without refuting the merits of the plan’s substance, Lee recommended the House and Senate introduce joint resolutions expressing to Obama that an international climate agreement should be submitted to the Senate for its “advice and consent.”

Republican senators are expected to reveal such a resolution soon.