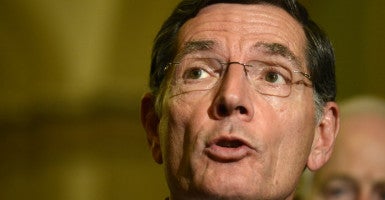 Senate Republicans, girding for another budget battle in early December, are vowing to use the process to undercut President Barack Obama’s chances of brokering an international climate pact expected to emerge from negotiations in Paris.

“We want to make sure that any of these countries that think they’re going to have a check to cash … that they shouldn’t cash the check just yet,” Sen. John Barrasso, R-Wyo., told Politico.

The threat arrives less than two weeks before U.S. diplomats are set to join representatives from nearly 200 nations in Paris to finalize a climate deal intended to cut carbon emissions.

Negotiators are expected to sign the final agreement Dec. 11 during the United Nations summit, running parallel with a deadline for Congress to submit its 2016 spending bill to Obama.

Barrasso and Sen. Jim Inhofe, R-Okla., sent a letter last week to the White House pledging to use the budget legislation to prevent U.S. tax dollars from flowing into the climate plan unless the president submits the deal to Congress for review.

Obama is said to be devising a strategy to avoid sending the agreement to Congress because of near inevitable rejection from the GOP-led legislature.

“While the executive branch and Congress both play an important role in the foreign policy of our nation, Congress ultimately holds the power of the purse,” Barrasso and Inhofe wrote.

The senators demanded that Todd Stern, U.S. special envoy for climate change, relay to foreign counterparts that “Congress will not be forthcoming with these funds in the future without a vote in the Senate on any final agreement, as required in the U.S. Constitution.”

Rachel Bovard, director of policy services at The Heritage Foundation, said the Obama administration plans to cast the pact as an “international agreement” rather than a treaty, which requires two-thirds approval in the Senate, because it would not attract the votes required for ratification.

“In an incredibly bold move, he has decided to subvert the intent of the Constitution—which requires Senate advice and consent for treaties,” Bovard said of Obama:

Essentially he is using legal loopholes to get around the constitutional role of the Senate, and impose this agreement—and its billions of dollars in costs—onto the American people without the say of their elected representatives.

During a hearing last week by the Senate Environment and Public Works Committee, Barrasso said Congress never approved the president’s promise to pour billions of U.S. funds into the Green Climate Fund. That United Nations fund allocates money from developed countries and private contributors to assist developing nations with protections against climate change.

“These actions in the House and Senate send a strong signal that the U.S. will no longer underwrite the global climate change project,” said Steven Groves, a senior research fellow in foreign policy at The Heritage Foundation. “If the poor countries attending the Paris negotiations don’t think the U.S. will make good on its financial pledges, they won’t sign any climate change agreement.”