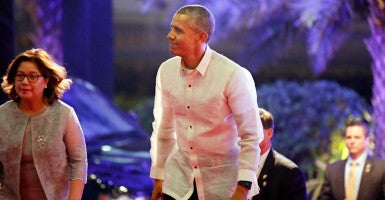 Senate Republicans emphasized Wednesday that they will fight the Obama administration for the right to review an international climate deal expected to be struck in Paris next month.

At a hearing of the Senate Committee on Environment and Public Works, GOP lawmakers insisted they should be able to review and vote on a deal that would commit every nation to combat climate change, and they threatened to withhold U.S. money that would help other countries implement their plans.

“I want to make clear to this administration and to foreign leaders looking for U.S. dollars — which is the linchpin of this agreement — that without Senate approval there will be no money, period,” said Sen. John Barrasso, R-Wyo.

To avoid the objection of congressional Republicans, the Obama administration has indicated it plans to negotiate the deal in a way where it would not be submitted to Congress as a legally binding treaty, which must be approved by two-thirds of the Senate.

Under the plan, reported by the New York Times, countries would be legally mandated to implement climate change policies, and possibly agree to a timetable to do so. But the countries would only voluntarily commit to specific amounts of emissions reductions.

The Obama administration would argue that the broad pledges by countries to address climate change by reducing emissions — without committing to specific levels — is already legally protected under an existing 1992 treaty.

By not making the deal legally binding, the Obama administration would essentially be agreeing to a “political commitment” or “sole executive agreement”, according to Julian Ku, a professor of constitutional law at Hofstra University, who testified at the hearing.

“I believe the Paris agreement should be submitted to the Senate as a treaty if it has legally binding emissions targets and timetables,” Ku told lawmakers. He added:

But I do not have a constitutional objection if the agreement is merely a political commitment that is not binding under international law, as long as the U.S. government declares which parts of the agreement are legally binding, and which parts are not. The Senate can play an important role by forcing clarity and transparency from the administration.

Ku said future presidents would not need to adhere to the agreement if it were not legally binding.

“A sole executive agreement is the weakest commitment we can make,” Ku said. “There are a lot of them, but they are usually for small things. If other presidents withdraw from the agreement, there is a cost to it, because other countries get upset about that. That’s why the use of an executive agreement has to be done carefully.”

Democrats on the committee argue there’s plenty of precedent for a president to adopt executive agreements without Senate consent, and that the urgency of the climate change issue should give Obama flexibility to negotiate how he wishes.

“I think there is plenty of precedent to take this next step in Paris and what flows from that as an executive agreement,” Carper told The Daily Signal.

In his remarks at the hearing, Carper elaborated:

“The science is clear that future generations face no greater environmental threat than the threat of climate change,” he said. “The price of action pales to the cost of doing nothing. The U.S. can’t do it alone, but we can provide leadership. I have confidence this administration working in conjunction with [other] laboratories of democracy will find the right recipe.”

Even though he has the support of his party, Obama is facing pushback from Republicans who want to undermine the president’s negotiating authority when he travels to Paris later this month.

In addition to to their concerns about the mechanism by which the agreement is negotiated, Republicans are also worried about money.

In a letter to be sent to Obama Thursday, Barrasso and Sen. Jim Inhofe, R-Okla., pledge to block funding to the “Green Climate Fund”, where developed countries would aim to contribute $100 billion per year by 2020, from both public and private sources, to developing nations to help them combat climate change.

Obama has already pledged $3 billion, but Republicans have blocked efforts to appropriate the money.

“To impose this kind of cost on the economy when there are no realistic expectations for other countries to meet its requirements is not wise,” said Sen. Jeff Sessions, R-Ala.

Despite the concerns over cost, Lisa Jacobson, the president of the Business Council of Sustainable Energy, told the committee a climate deal would boost investment in clean-energy technologies, which she says would produce savings down the road.

“Just the fact that such a large scope of countries [have released] adaptation plans is a major breakthrough,” Jacobson said. “As companies, we see that as an important market signal and respond to that. When we see 160 countries say they want to lower carbon emissions, we will step up to help them reach their goals.”

Nevertheless, on Tuesday night, the Senate voted to strike down two components of Obama’s Clean Power Plan, which would cut carbon emissions from existing power plants, and set restrictions for new power plants.

The House is expected to approve its own resolution closer or during the Paris climate summit. Obama is expected to veto the measures, and lawmakers do not have the votes to overturn it.