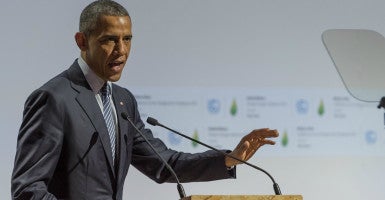 Republicans upset with President Barack Obama’s international climate change agreement remain committed to the few options they have to do something about it.

“Honestly, I never feel helpless,” insisted Rep. Mike Kelly, R-Pa., one of the leaders in the House opposing Obama’s climate change plans. “Whatever is going to happen today is going to happen today. This is a generational battle. If we think after one battle, one skirmish, we should throw in the towel, we are not leading the America that we have been entrusted with.”

“We will just keep fighting and are never, ever going to give up,” Kelly added. “I just keep asking our guys: What else can we do?”

Since it became clear that Obama intended to pursue an accord committing nearly every nation to lower planet-warming emissions without seeking congressional approval, Republicans have tried to insert their authority into the matter.

But Obama has no intent to oblige, and negotiators went out of their way to word the agreement in such a way to where they believe it does need to be submitted to the Senate as a treaty.

Opponents are also threatening to use their “power of the purse” to withhold money that the U.S. plans to contribute to developing nations to combat climate change.

Obama has pledged to contribute up to $3 billion in U.S. spending on the Green Climate Fund, including $500 million in fiscal year 2016.

The Green Climate Fund is a pool of money through which developed countries, with contributions from public and private sources, help developing nations confront climate change.

A new spending bill appropriating money for this fiscal year—which is expected to be voted on by lawmakers this week—does not assign money for the Green Climate Fund.

But Republicans were unable to attach a proposed policy provision that would have explicitly blocked Obama from sending federal money to the Green Climate Fund.

In addition, the $1.1 trillion spending bill does not prohibit the administration from transferring money from other accounts for the climate fund.

On Wednesday, White House Spokesman Josh Earnest said Obama is interpreting the spending bill as allowing him to pay into the climate fund, since Republicans did not explicitly bar the funding.

“Based on what we have reviewed so far, there are no restrictions on our ability to contribute to the Green Climate Fund,” Earnest said.

Kelly, in an interview with The Daily Signal, said Republicans would continue to try to stop efforts to appropriate the money, although it’s unclear how they can.

“If it comes down to this and we are going to take hard-earned American taxpayer money to pay for it, than that is a no-go for me,” Kelly said. “That is not a bus I am ever going to get on.”

If the funding issue is indeed resolved for this fiscal year, Kelly and other Republicans are still pushing for Congress to review the climate deal.

Kelly is the author of a resolution “expressing the sense of Congress” that Obama should submit the climate deal struck in Paris last week to the Senate for approval.

The combined measure, filed as a “concurrent resolution” last month, is non-binding, meaning it does not function as law or require approval of the president.

Instead, it is meant as a messaging vehicle to pressure Obama to submit the climate deal as a treaty. The House and Senate have not yet voted on the resolution.

Yet the Obama administration, mindful that the Republican-led Congress would block the deal, says it is not obligated to share it with the Senate.

Negotiators argue that the climate change agreement does not include target levels for countries to reduce their emissions. While every country is required to put forward a plan, there is no legal requirement dictating how, or how much, countries should cut emissions.

In addition, though, the countries party to the deal have to legally monitor, verify, and report progress on their emissions-reductions, there is no enforcement mechanism, or penalty, for not doing so.

So because the Obama administration says the agreement does not include “targets and timetables,” U.S. negotiators contend that it can be produced as an executive agreement that is already legally protected under a 1992 United Nations climate change treaty.

Lee, in an interview with The Daily Signal, says he is not buying this argument.

“I am aware of no exception to the ratification requirement in the Constitution saying if you don’t have any specific emissions targets in a global climate change agreement, that means you don’t need advice and consent from the Senate,” Lee said. “There are still obligations. That is the nature of an international agreement. And when we are making obligations, regardless of the nature of the obligations, we need to have that review process—that’s what the Constitution contemplates, and that’s the kind of process that guarantees the American people will have some input.”

Lee said he has not received a commitment from Senate Majority Leader Mitch McConnell, R-Ky., that he would bring the “concurrent resolution” to the floor for a vote, although Lee believes there’s a “decent” chance it happens next year.

Even if the measure passed, it would be nothing more than symbolic, and Lee said it’s unlikely a court would intervene to force Obama to submit the climate agreement as a treaty.

“This is not the kind of thing that is likely to be enforced by a court,” Lee said. “This interaction is between two branches of government, and if we don’t make sure that it happens, we can’t assume anyone else will do it for us.”

The EPA regulations, which form the basis of the U.S. commitment to the larger global climate deal, are being challenged in court by two dozen states.

Republicans’ best chance to fight the international climate agreement may not come soon.

Since much of the agreement is not legally binding, a potential future Republican president does not have to uphold it.

“One of the consequences of not getting Senate ratification is that it’s not binding on a subsequent president, and I would not anticipate a subsequent Republican president would be inclined to honor an agreement that does not carry the force of a ratified treaty that amounts to the law of the land of the constitution,” Lee said.

“The reality is, the whole world committed to a conversation,” Kelly said. “This is a wish list. It has nothing to do with reality. I don’t know who the president is going to be, but I hope that person understands they are the best chance we have to make sure that in our lifetime we are never going to walk away and say we can’t win.”

Secretary of State John Kerry, meanwhile, says Obama is not worried about Republican attempts to undo his executive actions.

“I don’t believe you can be elected president of the United States if you don’t understand climate change or you’re not committed to this kind of a plan,” Kerry said on ABC this past weekend.