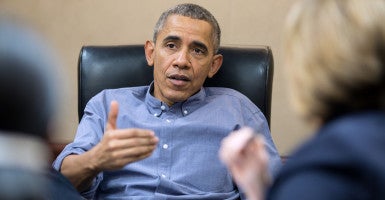 In his Oval Office address to the nation Sunday night, President Obama incorrectly claimed that one of the San Bernardino terrorists arrived in the United States under the visa waiver program. The White House acknowledged the mistake shortly after the speech.

According to Politico, Obama inadvertently added the word “waiver” in his comments about Tashfeen Malik, who carried out the California attack with her husband Syed Rizwan Farook last week. Malik came to the United States through the K-1 fiancé visa program. The attack killed 14 and left 21 injured Wednesday.

In his speech, Obama said he “ordered the Departments of State and Homeland Security to review the visa waiver program under which the female terrorist in San Bernardino originally came to this country.”

Obama delivered the speech at 8 p.m. ET from a podium in the Oval Office, reading from a teleprompter. It’s rare for the White House to issue a formal correction to a nationally televised speech.

The president’s mention of the visa waiver program comes at a time of heightened scrutiny for the program. In recent weeks, members of Congress have proposed changes to the program, which allows citizens from 38 countries to travel to the United States for up to 90 days without a visa.

Some lawmakers want to prohibit people who have visited Syria and Iraq in the past five years to obtain a waiver. Others have suggested a 30-day waiting period.