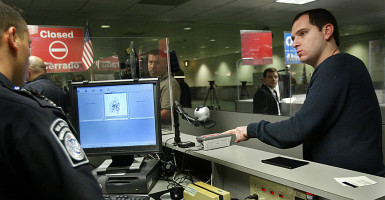 Travelers from countries participating in the visa waiver program face a quicker route to enter the U.S., but there are still substantial security checks, like fingerprinting. (Photo: C.W. Griffin/KRT/Newscom)

The Paris terror attacks have jolted Congress to consider ways to make it more difficult for people outside the country to enter the United States.

After the House last week passed legislation toughening security checks on Iraqi and Syrian refugees, some lawmakers argue that the real threat is a terrorist using a program that allows citizens from 38 approved countries to travel to the U.S. for up to 90 days without a visa.

While lawmakers faced some pushback for targeting Syrian refugees, the idea of reforming the visa waiver program is supposedly a safer—and more effective—bet.

But defenders of the program, meant to encourage easy business and tourist travel from overseas to boost the economy domestically, insist it is being unfairly targeted.

“It is one of the greatest security tools the U.S. has in combating people traveling illicitly,” said David Inserra, a homeland security expert at The Heritage Foundation.

“We have gained so much information from the visa waiver program. It is one of the best travel-based programs the U.S. has for combating terrorism.”

“It is one of the best travel-based programs the U.S. has for combating terrorism,” says @dr_inserra of the visa waiver program.

Sens. Jeff Flake, R-Ariz., and Dianne Feinstein, D-Calif., who calls the program the “soft underbelly” of America’s national security, are preparing legislation to ban a visa waiver for people who’ve traveled to Syria and Iraq in the past five years.

Sen. Rand Paul, R-Ky., is also proposing a bill that would impose a 30-day waiting period for people traveling through the program.

These lawmakers worry that Europeans who have gone to fight with the Islamic State, also known as ISIS or ISIL, in Iraq or Syria can return to their home nations and use the visa waiver program to enter the United States.

Yet those familiar with the program say that people applying for a visa waiver—a program established in 1986 that allows 20 million each year to enter the U.S.—are screened through an electronic system more intense than even the normal visa process.

“The name ‘visa waiver’ brings to mind an overzealous third base coach waving people into the country with reckless abandon, but that belies the serious intent of the program,” said Jonathan Grella, executive vice president of public affairs for the U.S. Travel Association.

The U.S. travel industry opposes efforts to restrict the visa waiver program and is lobbying legislators to inform them of the program’s security and screening requirements.

“What the program really does is enable countries who we have strong relationships with to share intelligence information and collaborate even more on keeping the world safer,” Grella told The Daily Signal. “That has been lost in the debate to this point. We want to avoid constructing travel hurdles that undermine our economy and give terrorists the victory—of fear—they are seeking.”

Indeed, the countries that join the visa waiver program—including most European countries such as France, Belgium, and the United Kingdom—must meet high data-sharing standards.

Countries must share information about known and suspected terrorists in their countries, lost and stolen passports, and law enforcement data related to serious crimes.

Stewart Verdery, a former assistant secretary at the Department of Homeland Security who worked on the visa waiver program, helped oversee reviews of participating countries.

“The program has been strengthened substantially going back the last 12 years,” Verdery said. “The countries have to do very good things to be in the program, like providing state-of-the-art passports, help the U.S. build watch lists and a national criminal database, and take back criminal aliens if they do something wrong. But in an era of high threat, the [Homeland Security] department and Congress should be looking for strengthening measures.”

In a requirement added after 9/11, travelers using the visa waiver program must apply online and pass the Electronic System for Travel Authorization (ESTA), an automated system that runs checks on a person’s security risk, including criminal history and whether one is on a national security watch list or no-fly list.

“In an era of high threat, the [Homeland Security] department and Congress should be looking for strengthening measures,” says @StewartVerdery of the visa waiver program.

If this system flags a person, he or she is denied a visa waiver and would have to apply for a visa through the regular process. Those seeking a traditional visa have to be interviewed in person at an American embassy abroad. The visa waiver program does not require an in-person interview.

In addition, this August, the Department of Homeland Security announced enhancements to the visa waiver program requiring travelers from participating countries to carry e-passports that contain biometric data embedded in computer chips.

“The agreement that we have made with these allied countries is, we will make it a little easier for you to come here in exchange for you giving us intelligence we need to watch out for bad guys,” Inserra told The Daily Signal.

Still, supporters of the visa waiver program are not opposed to certain improvements, and the Obama administration has expressed a willingness to work with lawmakers on the issue.

One concern with the visa waiver program that people seem to agree on is that some participating countries are better than others at sharing data.

Grella and Verdery are less supportive of the Flake-Feinstein plan, but not because of its attempt to prevent travel for people who’ve recently been to Iraq and Syria.

They are worried about a less talked-about provision of the proposal that would mandate that travelers using the visa waiver program be fingerprinted and photographed before leaving their home countries.

Verdery contends that this measure would be redundant and expensive, because currently travelers are fingerprinted and photographed immediately after they arrive in the U.S., where airports are better equipped to collect that information.

If fingerprints taken after the flight match criminal records, that person could be arrested or sent back to his or her home country.

“In theory, it’s a good security addition if there was a way to do that,” Verdery said of collecting fingerprints before the flight. “But right now, there is no way to collect that. Is the added security benefit of finding an impostor eight hours earlier worth the cost of building the IT capability in every airport in world? That’s the question.”

Inserra believes that the Flake-Feinstein proposal does not address the biggest vulnerability of the visa waiver program.

“If we knew someone went to Syria, that would already be a red flag,” Inserra said.