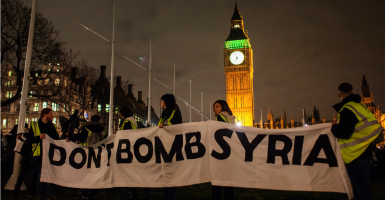 On Wednesday, the House of Commons voted to expand Britain’s air war into Syria. Expanding the British air campaign into Syria should have been an easy decision to make, since much of the territory ISIS controls is in Syria, with its capital in Raqqa, but Prime Minister David Cameron has had a hard fight winning the vote. The final numbers were 397-223 in favor, with 66 members of the Labour opposition voting in support of the Conservative government.

The U.K. has been carrying out airstrikes against the Islamic State (ISIS) since Sept. 2014, but only in the territory ISIS controls in Iraq. This makes little sense, as ISIS now operates throughout Syria and Iraq with impunity and brutalizes the populations it controls in both. The U.K. respecting this border, while ISIS obviously did not, placed absurd operational limits on its ability to fight this war.

Now that the decision has been made, an increase in Britain’s military contribution to the war against ISIS should be welcomed. This religiously inspired death cult presents a clear danger to international security.

The continued existence of an ISIS “caliphate” in Iraq and Syria has drawn young Muslims from around the world to fight on its behalf. This has included thousands of Europeans and approximately 800 British citizens. For all the talk that comes from the British and American governments concerning radicalization and the role of social media, the quickest path to defeating ISIS’ message is to kick them out of the territory they control.

The territory ISIS controls is the only thing that gives its “caliphate” any legitimacy.

This has included thousands of Europeans and approximately 800 British citizens.

ISIS Attacks on the Rise

ISIS has also taken credit for attacks throughout the Middle East, including bombings in Saudi Arabia, Yemen, and Lebanon. It has affiliates—albeit quite loose ones—across the Middle East, South Asia, and Africa, with a strong presence in Libya. The ISIS affiliate in the Sinai Peninsula has even developed an ability to smuggle bombs onto civilian flights, killing 224 people in October after an explosive device was detonated over Egypt’s Sinai desert.

In the U.K. specifically, the ISIS threat is clear. Cameron has stated that since November 2014, there have been seven separate ISIS plots disrupted by the security services.

Thirty British citizens were killed by an ISIS gunman in the Tunisian beach resort of Sousse in June of this year. ISIS, notoriously, beheaded Brits it held in captivity in Syria, and then posted the grisly results on the Internet.

The U.K.’s allies are also under attack. Even prior to the brutal attacks in Paris last month, there were 32 ISIS plots in the West between July 2014 and August 2015 (an average of 2.3 a month). These took place in 10 separate countries, including in the U.S. and Canada.

If the U.K. wants to remain a major player on the international stage, it is vital that it stand with its allies in the face of this ISIS threat. Ultimately, it is impossible to see how ISIS will be rooted out from the areas it controls without a more expansive ground troop presence. That, however, is not a conversation Western governments appear willing to have just yet.

Clearly, defeating ISIS is no easy task, and the U.K.’s military contribution is not going to get the job done by itself. Yet it does place more pressure on the group and sends out an important message. ISIS cannot plot attacks in our cities, behead our aid workers, and gun down our tourists with impunity. There are consequences. It must be hoped that ISIS now begins to feel them.