Not So FAST: 3 Major Problems With the Highway Conference Agreement 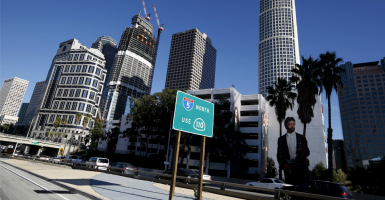 Overall, the bill hikes spending above the levels in either the House and Senate bill and pays for them with fiscal hocus pocus while ignoring the major problems faced by the highway trust fund. (Photo: Lucy Nicholson/Reuters/Newscom)

Fittingly, Congress is in overdrive for FAST and has already scheduled a vote in the House for today, a mere two days after it released the 1,300-page bill. Current spending authority for transportation programs expires on Friday, Dec. 4.

Unsurprisingly given that FAST stemmed from two big-spending bailouts—the Surface Transportation Reauthorization and Reform (STRR) Act in the House and the Developing a Reliable and Innovative Vision for the Economy (DRIVE) Act in the Senate—it still does nothing to fix the major problems with the Highway Trust Fund, including chronic deficits and the expansion of its focus to projects that have nothing to do with the nation’s highways.

But even by the standard of its predecessors, FAST has some major problems:

Even though the trust fund is slated to run $15-billion deficits each year, the conference had to decide whether to continue current funding levels as STRR would (totaling $325 billion over six years) or spring for the higher allocations in DRIVE ($342 billion). Rather than meeting in the middle as a compromise, FAST emerged from the conference spending more each year than either STRR or DRIVE would, but over 5 years instead of 6. The rub here is that these plussed-up funding levels would become the new baseline, essentially guaranteeing greater future spending. All told, FAST would spend $281 billion over 5 years compared to $268 billion for STRR and $280 billion for DRIVE. That’s how lawmakers “compromise” with taxpayer money.

What do the Federal Reserve, private debt collectors, and passport denials have to do with funding roads and bridges? Well, nothing—but these are some of the seedy gimmicks that Congress tinkered with in order to pay for FAST. Most of these measures either won’t produce real savings or have absolutely nothing to with transportation, but Congress still tapped them to generate $75 billion in offsets to pay for new spending. The most egregious offender was nabbing $60 billion from the Federal Reserve through two separate measures. Other shenanigans include planning to sell government oil for over $90 per barrel (the current rate is around $40), allowing the IRS to hire private debt collectors, revoking passports for tax delinquents, and increasing user fees for U.S. customs services.

The Highway Trust Fund has already required $73 billion in bailouts since 2008. FAST would nearly double this amount by transferring $70.3 billion to the HTF, primarily from the general revenues. This sets a disturbing precedent of assembling a hodgepodge of unrelated measures to fuel more transportation spending rather than stepping up and reforming a broken system. And even worse, this bailout puts the trust fund farther into the hole: according to the Congressional Budget Office, the trust fund will exhaust its balances again by 2021, at which point another 5-year bailout would require almost $100 billion.

Overall, this bill hikes spending above the levels in either the House and Senate bill and pays for them with fiscal hocus-pocus while ignoring the major problems faced by the highway trust fund. Our transportation system deserves real reform, not another pot of cash for Congress to mismanage.