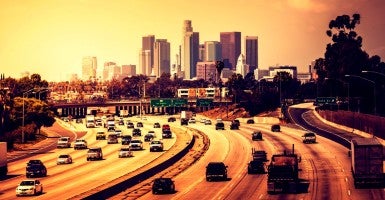 On Thursday the Senate sent yet another short term extension of the Highway Trust Fund to the president’s desk (the fourth this year). This latest short term extension means that members of the highway bill conference have until Dec. 4th to pass a bailout through hammering out the small differences between what has passed in the House and Senate.

Unfortunately, neither the House, nor the Senate plan offer any meaningful reforms that would address the trust fund’s chronic overspending that has already required $73 billion in bailouts since 2008.

So while the final product will inevitably be another status-quo bailout, there is one area in which members have embraced innovative thinking: finding gimmicks and other fake savings in unrelated areas of the budget to fund this new spending.

Because the trust fund is projected to run over $80 billion in deficits over the next 6 years, the final bill will require at least that much in offsets.

And that’s where the gimmicks come in. For members of congress, it’s easier to pull together a menu of small, palatable offsets from across the government instead of having to make tough decisions or enact fundamental reform. Here are the worst offenders in consideration for the highway bill:

In a gimmick that Former Fed Chairman Ben Bernanke has denounced as a “budgetary sleight-of-hand”, Congress would eliminate the Federal Reserve’s $29 billion surplus fund. This measure would simply drain the Fed’s surplus fund (a rainy day fund of sorts) and send future sums that would have been set aside to the Treasury.

But since any interest these balances generate would eventually be remitted to the Treasury (and since the Treasury would ultimately have to cover any Federal Reserve losses anyway), this gimmick simply shifts the timing of future cash flows. Worse, tinkering with the Fed’s balance sheet to fuel a spending measure eviscerates the notion that the Fed is separated from Congressional politics.

In addition, the initial bills relied on a different offset that would change in the Fed’s dividend payment rate to member banks, generating $17 billion. Although this similar gimmick was shelved last minute in favor of eliminating the surplus fund, members should resist any renewed temptation to double up on the Fed in order to fuel even more spending.

This measure would instruct the Department of Energy to sell off 101 million barrels of oil from the unrelated Strategic Petroleum Reserve to generate over $9 billion. But in a classic case of government accounting, the bill assumes that the Department of Energy could somehow command $90 per barrel, even though the market price is currently $40 per barrel. Good luck.

This offset would shamelessly increase fees on travelers who are required to go through the U.S. Customs service and spend the new money on transportation. Repurposing the Customs service’s true user fee for highway spending (which already relies on its own user fee in the form of the gas tax) is inexcusable.

By contracting out the responsibility of collecting outstanding tax payments to private debt collection agencies, this offset would generate over $2 billion in new revenues. In exchange for their services, the Feds would have to fork over a portion of the collections to the private contractors. The big problem with this? This practice has been tried twice before and ended up losing money both times.

Sundry other gimmicks would simply shift money around on paper or generate dubious new revenues. These include efforts to increase the penalties for vehicle safety violations, recycling unspent contract authority, correcting interest payments on government overpayments, and other revenue changes worth hundreds of millions of dollars.

Altogether, this unlikely menagerie of gimmicks will enable congress to bail out the Highway Trust Fund with billions of dollars without having to make real spending cuts or true reforms. At the very least, lawmakers should make the least irresponsible decision regarding spending levels as possible.

The conferees still must determine whether to adopt six-years of funding at baseline spending levels (generating annual deficits of about $15 billion) or the Senate’s preference of a shorter bill with higher spending levels, meaning even larger deficits.

The responsible move would be to reject this false proposition of spending more in exchange for a shorter bill. Once higher spending levels are enacted, they become the new “baseline”, begetting even more spending and commensurate bailouts in the future. This is not a prudent course for a trust fund with a cumulative deficit already projected at $159 billion over the next decade.

Perhaps one bright spot is that once these one-time gimmicks are used up, they won’t be around anymore for Congress to lean on. Just maybe this will prompt lawmakers to do the right thing when they’re back in the same spot after the trust fund burns through this latest bailout in just a few years.