Obama’s Address on Terrorism Today Is Too Little, Too Late 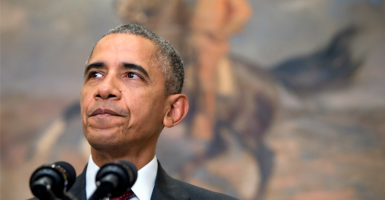 This time there were no petulant attacks on Republicans or cringe-inducing vows that working on climate change would deliver “a powerful rebuke to the terrorists.”

It may have taken opinion polls scraping 40 percent. Or maybe it was withering criticism from even members of his own party. Whatever it was, President Barack Obama finally sought to reassure wary compatriots about to gather for Thanksgiving that he is taking their legitimate concerns over terrorism seriously.

It was too little, too late, of course, but at least it hinted at some nebulous reckoning with reality.

“We are taking every possible step to keep our homeland safe,” Obama told the nation Wednesday at a noon-time address. “Our counterterrorism, intelligence, homeland security, and law enforcement professionals at every level are working overtime.”

There were even signs that the president might (might) finally be getting that what he is doing to defeat ISIS is failing on an epic scale, though he promised only to consider changing tactics, not the actual failed strategy. “We will not let up—adjusting out tactics where necessary—until they are beaten,” he said.

It felt good to know that Obama remembers now and then that he is commander-in-chief for all Americans, not just a political brawler out to score points on the opposition.

The hastily put together address from the White House came after days of ridicule heaped upon the president by even members of a hitherto usually pliant media for his desultory reaction to the Paris attacks that left 129 people dead on Nov. 13.

Obama offered no specifics on a change, of course—just generalities such as “we are both equipped to prevent attacks, and resilient in the face of those who would try to do us harm.” He also went out of his way to urge Americans to take precautions, even though “right now we know of no specific and credible intelligence indicating a plot on the homeland.”

It felt good to know that the president remembers now and then that he is commander-in-chief for all Americans, not just a political brawler out to score points on the opposition.

But it will take more, much more, than simply telling Americans “if you see something, say something. That’s always helpful.”

This is, after all, the president who only a few days ago described the biggest attack in Paris since the Nazi occupation as a “setback” and the terrorist group that is building a caliphate in parts of Iraq and Syria as “a bunch of killers with good social media.”

And this is the same president who Tuesday, at a joint press conference with French President François Hollande, openly courted ridicule by promising that holding a climate change conference in Paris next month would deal “a powerful rebuke to the terrorists.”

The reality is that it may take the next president to take the necessary steps. As Heritage’s James Carafano said earlier Wednesday, here’s a simple to-do list for our next administration (an expanded version here).

For that we will have to wait 14 more months. In the meantime, we are grateful that the present president has finally stopped to listen to the people.