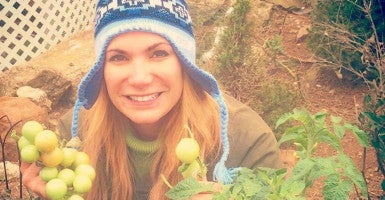 'We have lived a nightmare': Virginia farmer Martha Boneta says she has new evidence that an environmental group has harassed her. (Photos courtesy Martha Boneta)

Virginia environmentalists and big landowners have made a concerted effort to interfere with the business activities of an organic farmer, claims a new lawsuit describing harassment that comes close to stalking.

Martha Boneta, who owns and operates the 64-acre Liberty Farm at the foot of the Blue Ridge Mountains in Paris, Va., seeks damages in Fauquier County Circuit Court from Piedmont Environmental Council, a nonprofit land trust headquartered in Warrenton, Va.

Boneta also seeks damages from the husband-wife real estate team of Phillip and Patricia Thomas, who are members of Piedmont Environmental Council. Phillip Thomas owns Thomas & Talbot Real Estate, based in Middleburg, Va. Patricia Thomas is a lawyer admitted to the bar in Virginia.

“We are in shock at the magnitude of terrorizing harassment,” Boneta told The Daily Signal, adding:

The investigation uncovered volumes of letters, emails, meetings, and phone calls from realtors Patricia and Phillip Thomas making false allegations to government agencies and meddling in our private lives to damage and force us off our farm. No American should ever suffer years of being terrorized. The stress and hardship have been unbearable.

On Thursday at 5 p.m., The Heritage Foundation will host a screening of  the documentary “Farming in Fear,” which provides an overview of the Boneta case, followed by a panel discussion on the latest developments. Boneta filed the new lawsuit in October on behalf of her company, Piedmont Agriculture Academy, after gathering what she calls more evidence against the Thomases and the environmental council through Freedom of Information Act requests and from citizen whistleblowers.

The latest complaint furnishes copies of written letters and email from the Thomases to bankers and government officials that Boneta claims show the couple worked to undermine her farming operations based on “false allegations.” Patricia Thomas frequently used her law firm letterhead in this correspondence.

As The Daily Signal previously reported, Boneta has produced evidence suggesting the environmental council and the Thomas couple lobbied a Fauquier County zoning administrator and members of the elected Fauquier County Board of Supervisors to issue zoning citations against Liberty Farm. The alleged collusion between environmentalists and government officials was at the heart of an earlier suit that remains active.

The updated complaint details how much real estate figures into the ongoing dispute, which has attracted nationwide attention to the privacy and property rights questions it raises. Phillip Thomas claims that because Liberty Farm is located close to his property in Paris, he has had difficulty selling it.

The Daily Signal has continued to email and call Thomas & Talbot Real Estate asking for comment from Phillip and Patricia Thomas but has not received a response.

Reached briefly by phone Tuesday, Philip Thomas said he prefers not to comment.

Piedmont Environmental Council released public statements on its website about the history of related property easement issues and the legal disputes with Boneta.

In addition to stories and a video (below) about her case on The Daily Signal,  Boneta has made appearances on national television with John Stossel and other Fox News personalities.

The environmental council, like other environmental groups across the country, has become so well connected with government at all levels, and so well funded, that it marginalizes average citizens at the expense of property rights, the farmer has warned.

Boneta became instrumental in the movement to pass two property rights bills through the Virginia General Assembly. They were signed into law.

Boneta purchased Liberty Farm, also known as Paris Farm, from the environmental council for $425,000 in June 2006, and a conservation easement was put in place simultaneously.

The idea behind conservation easements is for property owners to receive tax breaks in exchange for agreeing to restrict future development on a portion of their property. Boneta’s easement lists Piedmont Environmental Council and the Virginia Outdoors Foundation as co-holders. In her current and previous litigation, Boneta claims that the environmental council overstepped its authority under the Virginia Conservation Act in monitoring and inspecting her property. She also says she never received any tax breaks through the easement.

In the past year, several major revelations came to light that raised serious questions about the validity and legal standing of the easement. In November 2014, the Virginia Outdoors Federation adopted a resolution that said it would be willing to assume full control of the easement from Piedmont Environmental Council.

However, as The Daily Signal previously reported, the foundation said it uncovered “a number of serious flaws” that require a “corrective amendment” to the easement.

In both the signed and filed versions, the environmental council claimed that Thomas “Stonewall” Jackson, the storied Confederate general, camped on the Boneta property. In fact, historical records indicate that Jackson was elsewhere in and around Paris, Va.

Since Boneta became the owner of Liberty Farm, the environmental council has conducted periodic inspectors to ensure compliance with the easement. The inspections went well beyond what the law permitted, Boneta has argued.

Now that the easement appears to have been riddled with flaws from the beginning, Boneta says, it’s fair to ask whether the environmental council should have been permitted on her property at all.

>>> Green Group Under Scrutiny for Trespassing, Harassment at Woman’s Farm

Boneta’s suit contends that Phillip and Patricia Thomas sent letters to Southern National Bank (Sonabank), which holds the deed on Liberty Farm, in an effort to financially injure her Piedmont Agricultural Academy.

In correspondence with government officials, according to the suit, the Thomases made “false allegations of animal mistreatment and neglect,” which later were dismissed after a veterinarian inspected the animals.

Boneta’s suit says the Thomases submitted “false reports” about Piedmont Agriculture Academy with the Fauquier County Sheriff’s Office regarding student volunteers working at the farm and contacted the Fauquier Commonwealth Attorney’s Office about bringing charges against her. It says the commonwealth attorney concluded that “no criminal prosecution is warranted.”

The suit also says the real estate agents made “false allegations” to the Virginia Department of Transportation, resulting in periodic closing of the farm’s entrance in 2009 and 2010.

“We have lived a nightmare caused by a creepy realtor and attorney couple partnering with PEC and a corrupt supervisor formerly on the board of directors of the same environmental group,” Boneta said in an interview with The Daily Signal. She added:

The evidence demonstrates an obsessed web of harassment that is terrifying. My heart breaks knowing malicious individuals like this exist in the world that would use their positions to intentionally hurt and want to destroy hardworking people that just want to be left alone to farm in peace. Why such a fixation with Boneta, her Piedmont Agriculture Academy, and Liberty Farm? What is the motivation?

The suit says the property remains advertised on the Thomas and Talbot Real Estate website but never has sold. Liberty Hall initially was advertised for sale for $1,950,000. The price later was dropped to $1,800,000. The suit adds:

Not only had Liberty Hall’s price dropped by $150,000, the Thomases had, by the third time Liberty Hall was listed for sale, added a $10,000 bonus to any agent representing a buyer or buyers who purchased Liberty Hall. …

Mr. Thomas believes and has stated that Liberty Hall’s proximity to Paris Farm [Liberty Farm] is the reason, or a significant reason, that none of the three of these instances upon which Liberty Hall was placed on the real estate market between 2009 and 2013 resulted in the sale of property. …

Mr. Thomas is experiencing seller’s remorse in that he wishes he or the Trust [Piedmont Environmental Council] still owned Paris Farm [Liberty Farm] and that he had not taken any action ultimately leading to PAA [Piedmont Agriculture Academy] owning Paris Farm.

Boneta’s lawsuit concludes that Phillip and Patricia Thomas made a deliberate effort to shut down the operations of her Piedmont Agriculture Academy:

The suit also calls out the environmental council for

… abusing the conservation easement and repeatedly entering upon [Liberty Farm] property upon unreasonable and unfounded bases, and in an inappropriate and unlawful manner, caused Ms. Boneta to spend significant time dealing with [Piedmont Environmental Council] representatives that Ms. Boneta would have devoted to … business activities but was, necessarily, unable to devote to … business activities.

More legal drama is set to unfold in the case. Boneta has told The Daily Signal that her Piedmont Agriculture Academy will file more lawsuits in federal court based on new evidence. The suits, she said, will include new charges filed under the Racketeer Influenced and Corrupt Organizations Act (RICO), with fraud among them.

Meanwhile, Virginia Outdoors Foundation is negotiating with Piedmont Environmental Council to let the foundation assume full control of the easement even as Boneta remains in active litigation against the Thomases, the environmental council, and the county government.

“The persecution of Martha Boneta is a reflection of the growing power of extragovernmental regulatory entities, of which land trusts are the most prominent,” Bonner Cohen, senior fellow at the National Center for Public Policy Research, told The Daily Signal. Cohen added:

Nearly 6 million acres of private land in the U.S. are under conservation easements, administered by over 1,200 land trusts, most of which are accountable to no one.  The temptation to collude with local governments and powerful real estate interests to the detriment of the landowner is almost irresistible, because they figure they can get away with it. This has become the modus operandi of elites once they determine to dispose of someone standing in their way. Martha Boneta fought back and exposed the cronyism for what it is, but until land trusts nationwide are subjected to oversight, the potential for abuse will persist.